Exploring the role of bicycles and infrastructure in bridging the gap. 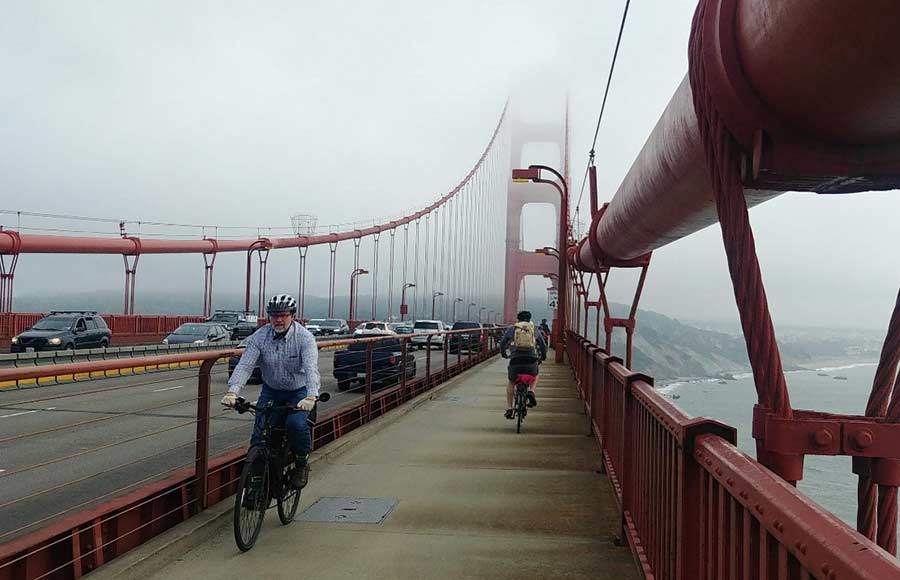 While many of us dream of a morning commute that allows us to bike leisurely from our doorstep directly to our office (and secure bike storage room), the constraints of time, distance and infrastructure make this a pipe dream for many urban commuters. Instead, most of us will hop on our city’s subway, light rail, bus or other transportation systems; the stops or stations for which are often beyond an easy walking distance from our origin and/or destination.

This portion of the commute is known as the first mile/last mile. 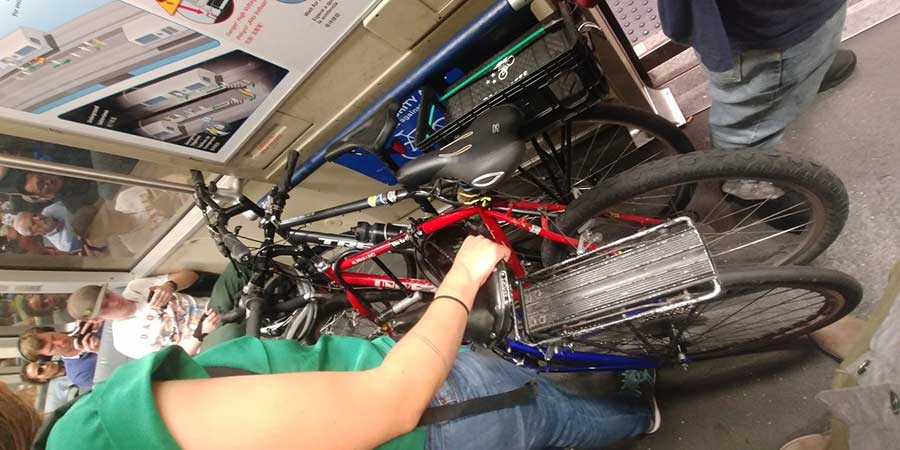 The popularity of using bicycles to supplement public transit is obvious on rush hour BART trains.

The good news is that bicycles can provide an excellent means of bridging these distances to get us to our final destinations. Some of the best illustrations of this exist in the area surrounding the San Francisco Bay. 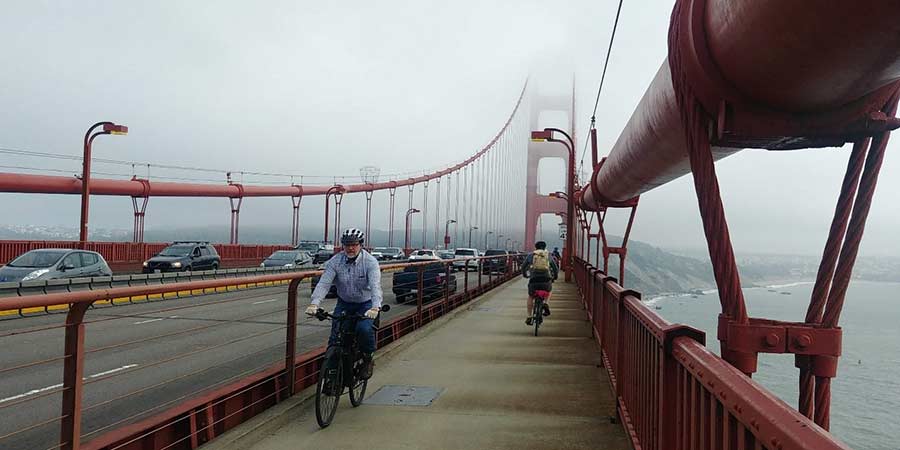 Commuters make their way across the Golden Gate Bridge

The Bay Area Rapid Transit (BART) train system connects San Francisco with Oakland, Berkeley and surrounding suburbs of the East Bay. Unlike cities such as NYC and Chicago whose transit lines are concentrated within the city with more frequent stops, BART extends further into the suburbs with fewer and more distanced stations. 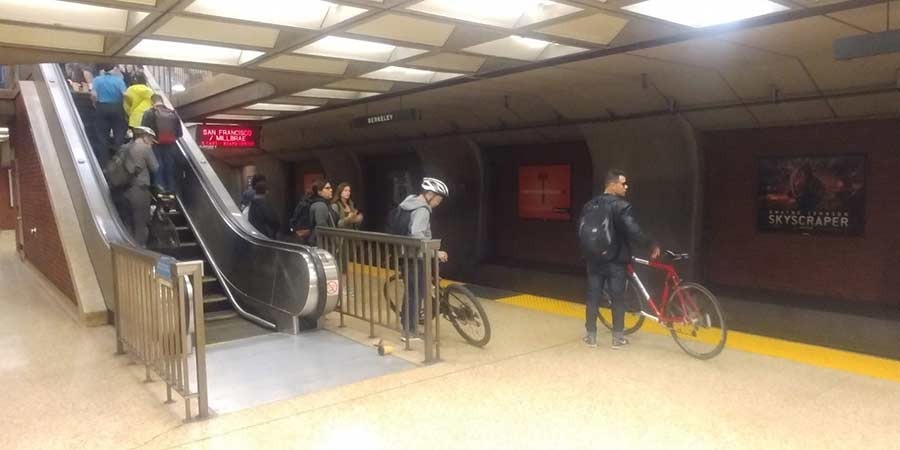 Commuters wait with bikes in tow for the next BART train.

In most cases, walking to cover these distances is impractical. Instead commuters turn to bikes as a faster and easier way to close these gaps.

Bike Share programs have popped up in cities across the country including those around the bay to help alleviate this issue. With stations often located right at transit centers, commuters are able to hop on the waiting bikes to complete their trips. 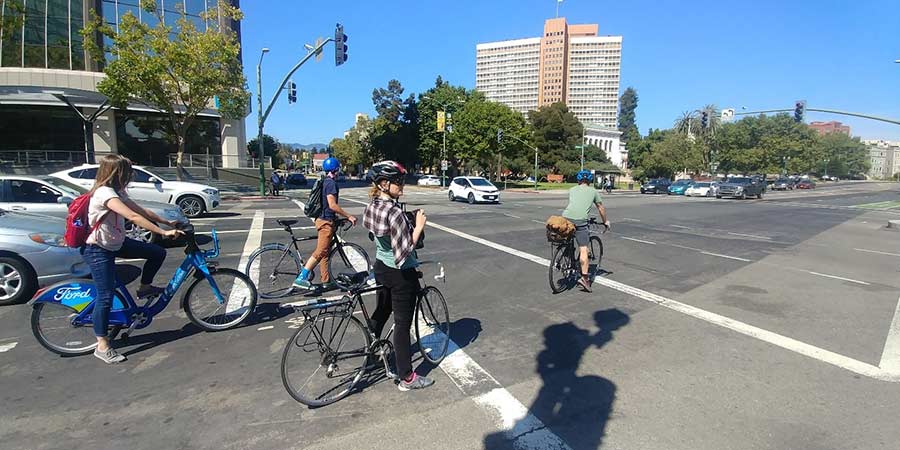 Cyclists in downtown Oakland utilize both personal and shared bikes.

Many others would prefer to bring their own two wheeled ride, especially for those with longer distances to cover. BART helps facilitate the use of personal bikes by providing bicycle-specific areas on train cars, ramps down into stations and parking facilities on site. 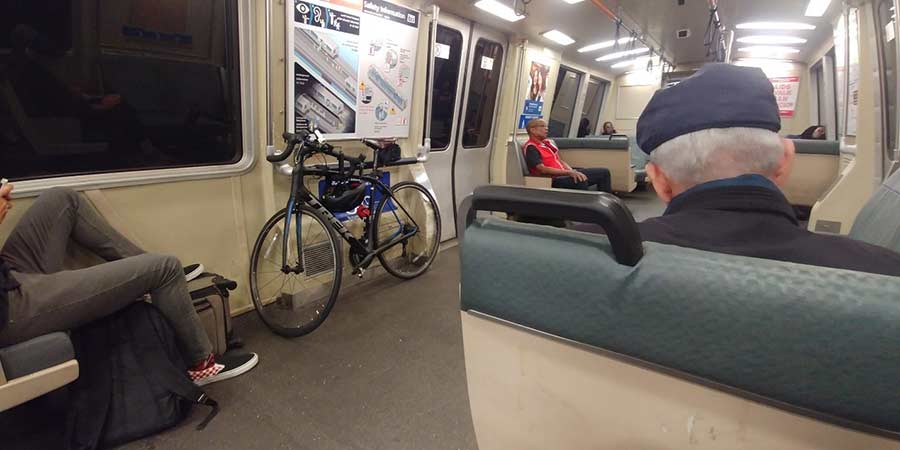 A designated bike space on a BART train.

While bringing the bike in tow for the entire commute works for many, others would prefer to drop theirs off when they arrive at the transit station. This creates a problem for those worried about leaving their bikes out for the duration of the day, despite being secured to a parking-specific bike rack. 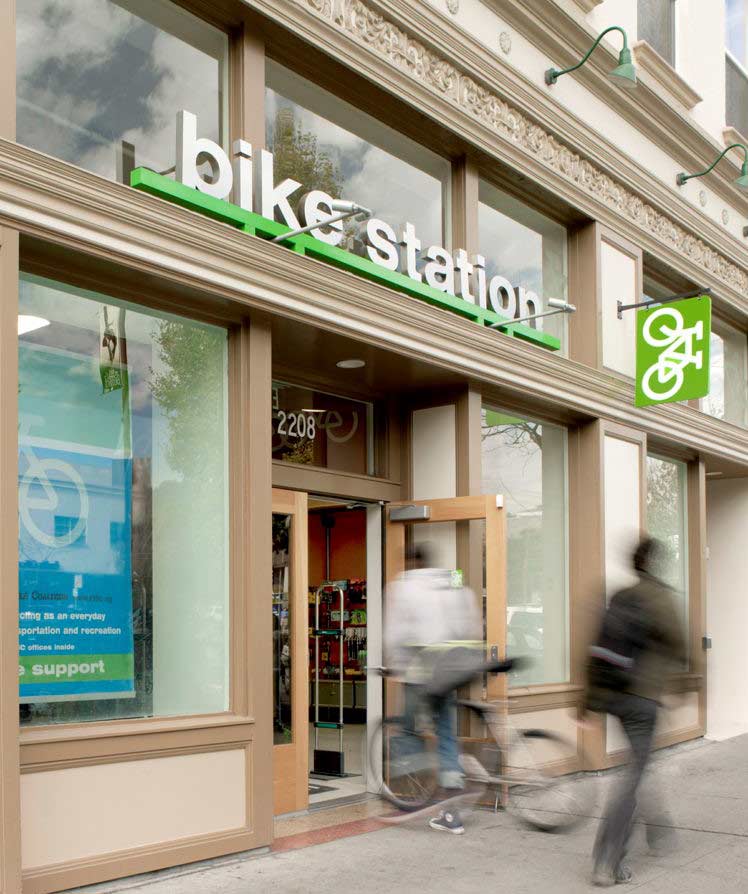 In this situation, many commuters have taken up the services provided by Bike Hub who operate 11 bike stations around the bay in conjunction with BART and Caltrain. 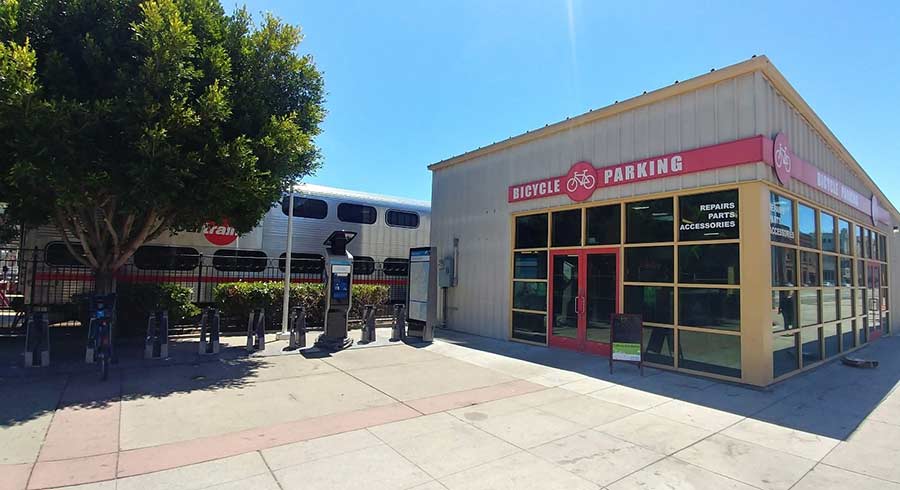 A Bike Hub location and bike share dock at a Caltrain in San Francisco allow greater flexibly and connectivity to commuters from the greater Bay Area as well.

These stations are located at various transit centers and offer secure parking facilities for commuters. Several of these stations have on-site staff who provide free valet parking as well as repair services and a small shop with basic cycling components and apparel. 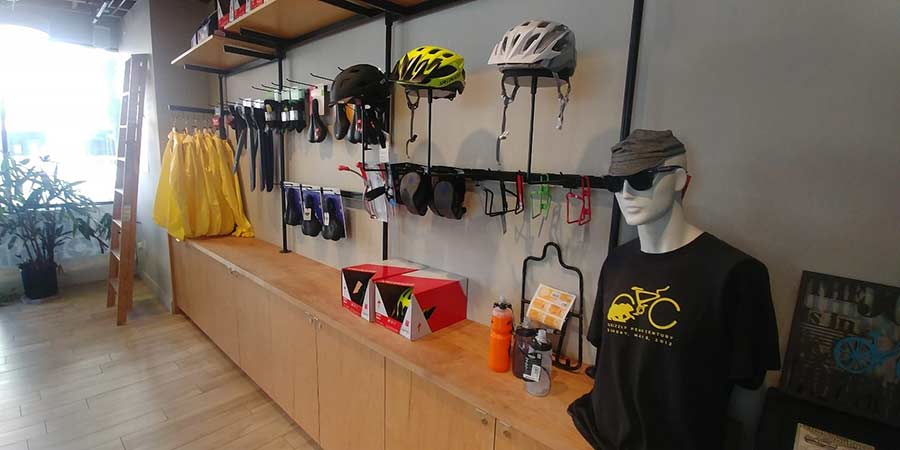 Other locations offer 24-hour controlled access parking for a small fee. These facilities feature high-density parking racks, like our stack racks. These bike racks provide parking for a lot of bikes, and feature a lift assist mechanism for easy loading and unloading of bikes stored on the upper tier. 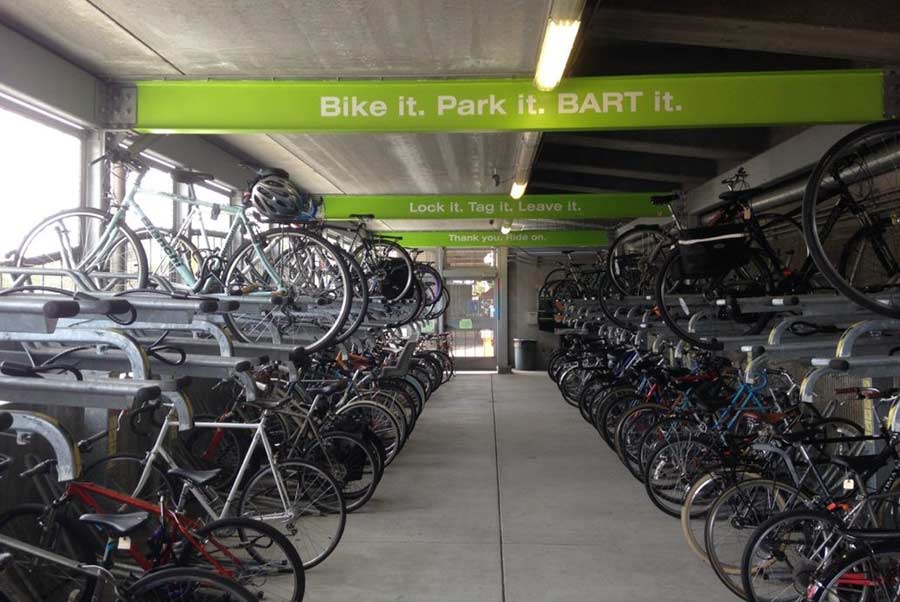 Bike Fixation public bike repair stations are also available in certain locations where mechanics are not on-site. This allows cyclists to pump up tires and preform minor repairs to keep their bikes up and running, which goes a long way to keep first mile/last mile biking a reliable form of transit. 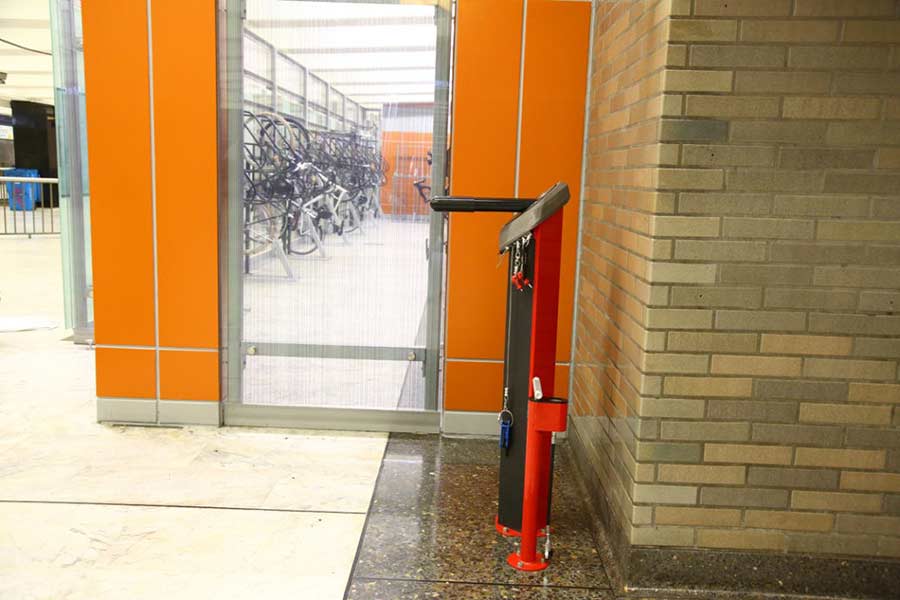 Not all of the Bay Area’s first mile last/mile bike trips are done from train stations. Many technology companies offer employees bus services from San Francisco to their campuses in Silicon Valley.

Most commuter buses sport bicycle racks on both the front and back to so that employees can easily reach and utilize the bus pick up locations by bike. Many firms also provide free bike services and secure storage to draw in top talent, as the ability to bike to work (at least part of the way) is a big perk to employees. 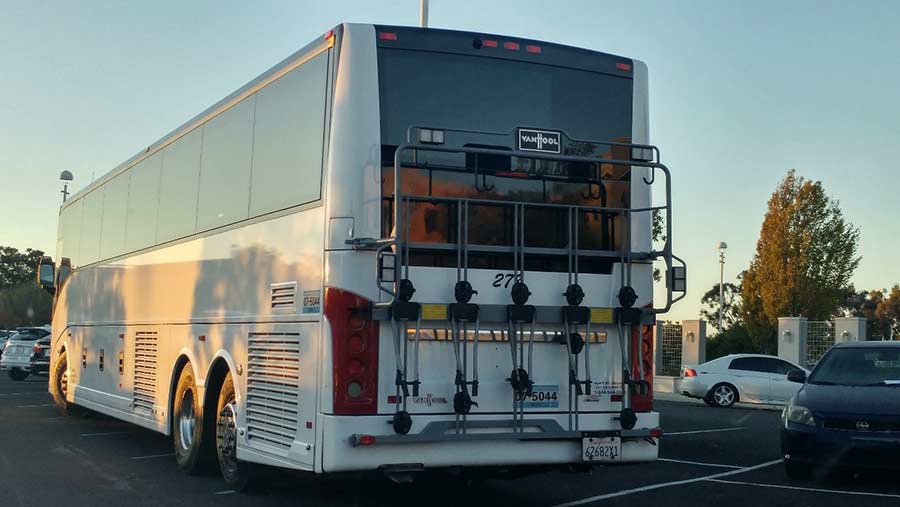 Bike racks seen on the back of a tech campus commuter bus.

While covering the first and last mile of a commute may be an issue for many, there are plenty of great examples of how people are using bikes to cover these gaps in the Bay Area. By doing so, they are extending the reach of public transit so more commuters can more quickly - and easily - move across their cities. 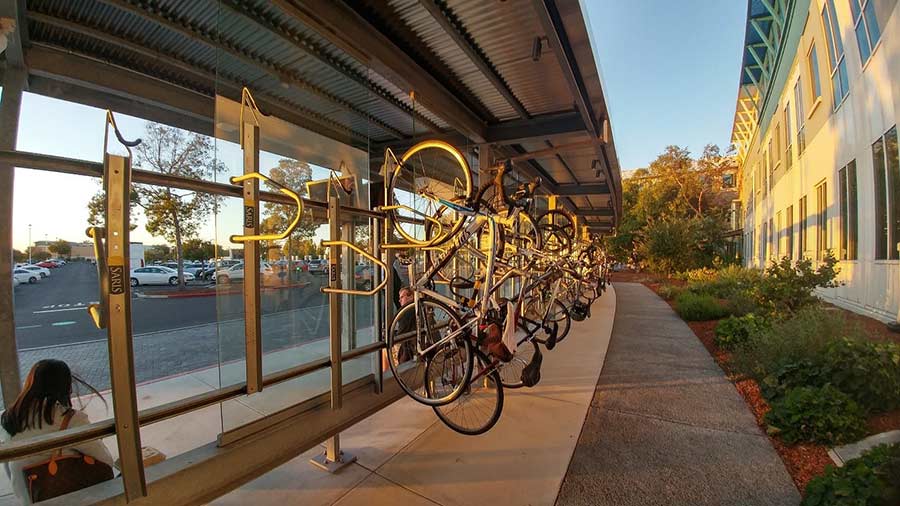