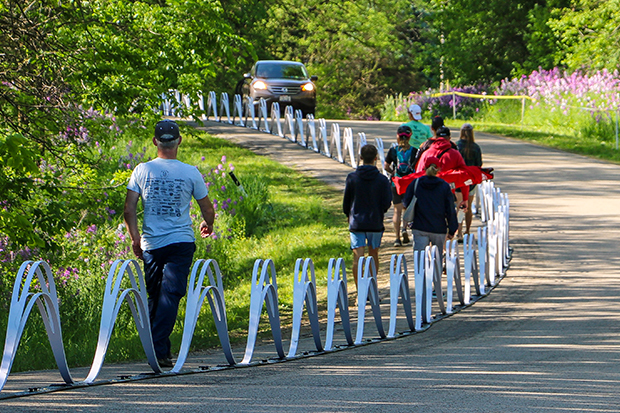 Over nine-hundred racers and three-thousand spectators converged on CamRock Park in Cambridge, WI, for the Battle of CamRock mountain
bike (MTB) race. The Battle of CamRock is the largest race in the Wisconsin Off-Road Series (WORS) and the biggest fundraiser for the local trail systems maintained by Capital Off-Road Pathfinders (CORP). 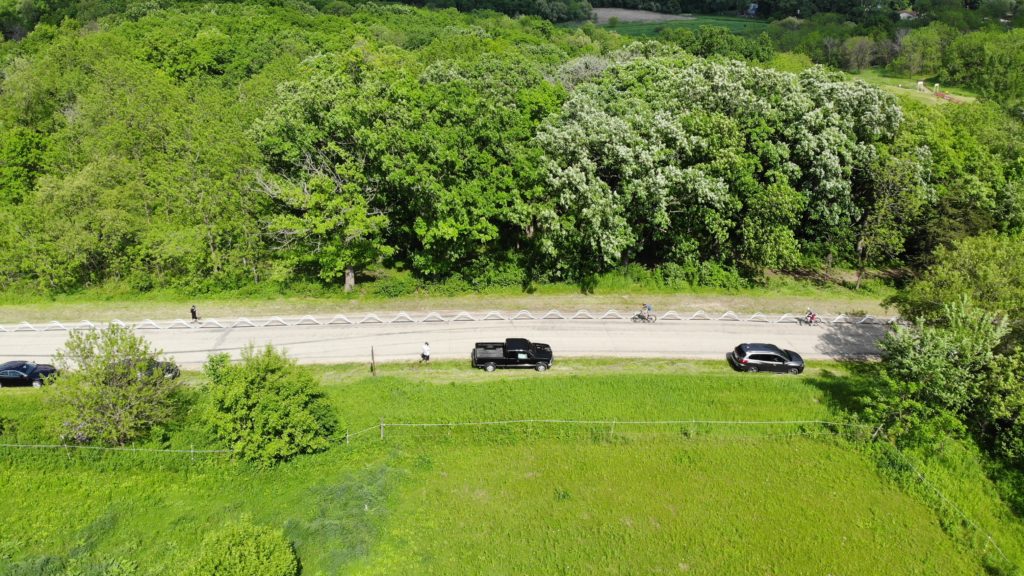 Eight-hundred feet of two-lane, 55-mph, country road linking the race parking area with the start/expo area. During the event, this section of road is a chaotic scene filled with pedestrians, bikers, drivers, toddlers, dogs and strollers. Pedestrians, often young children, commonly wander in front of vehicles as they make their way around the venue.

In the past, the race organizers used old paint cans or caution tape to delineate the pedestrian traffic from cars. They found the paint cans did not provide an adequate barrier to keep pedestrians in their lane and caution tape proved too difficult to install on pavement. 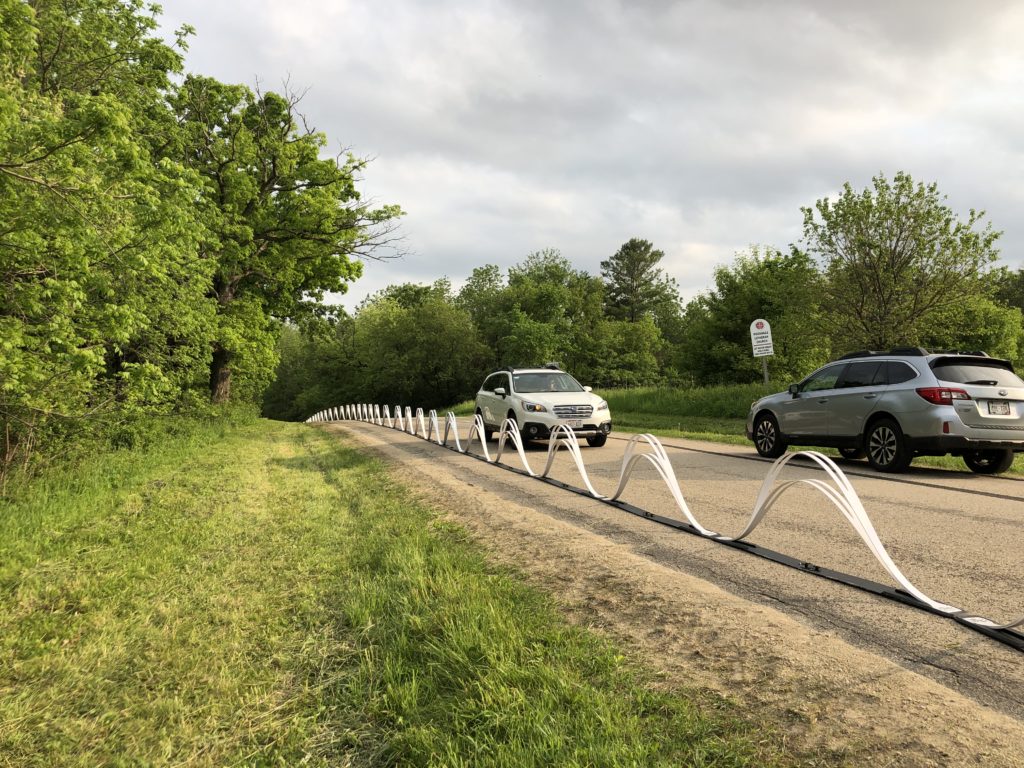 Event Directors today have very limited options for safe and effective event barriers for on street use; much less a barrier that is also
elegant.  Enter the Saris Wave Delineator. The Wave Delineator delivers simple, beautiful, collapsible, easy-to-move, lane delineation that brings joy to participants, bystanders, drivers and businesses alike.

Developed in collaboration with the Los Angeles Department of Transportation and Gensler Architects the Wave Delineator is an aesthetically pleasing, temporary, visual barricade for bike, bus, or pedestrian pop-ups, events, races or demonstrations.

Don’t be fooled! (unless you’re driving). The Wave Delineator is not metal. The Wave is constructed from ABS plastic, the ideal material for a flexible yet sturdy design. This proprietary material is resistant to the effects of UV light and temperature extremes.

The Wave Delineator is height-optimized for drivers and cyclists, ADA compliant and features safe chamfered edges and reflective decals. 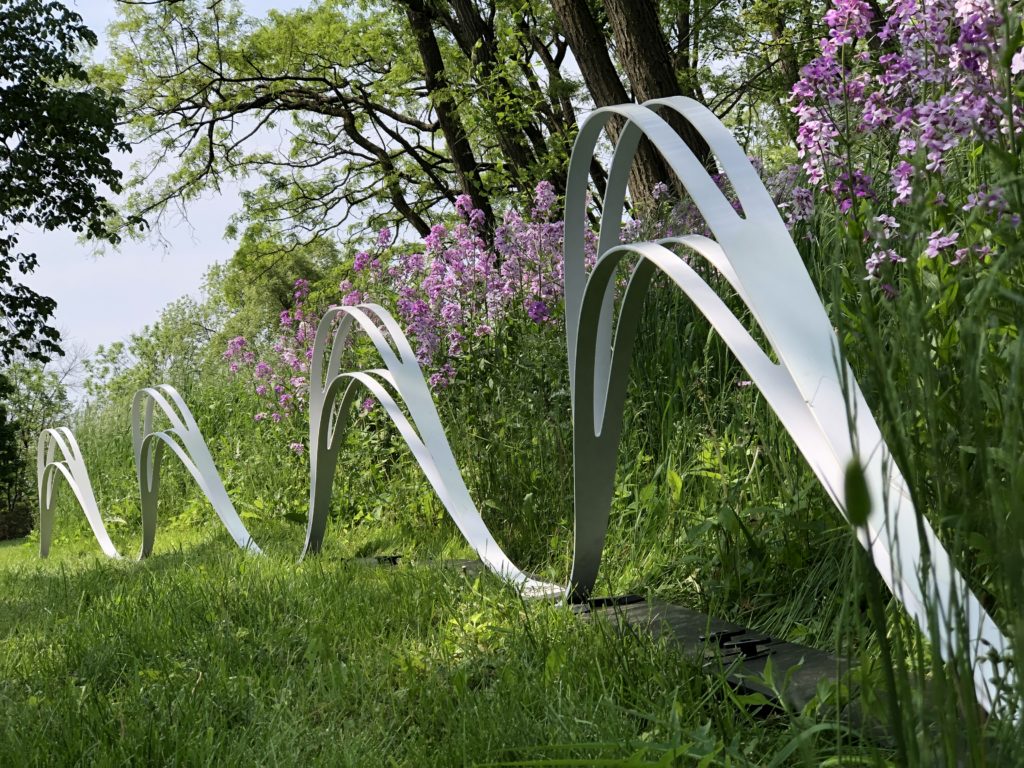 It’s simple: events that look good in-person and on film, demand higher sponsorship levels, attract more participants and ultimately generate more revenue. In the past, Event Directors were forced to settle for ugly construction bollards, costly concrete barriers, rental fencing, straw bales, caution tape or unwieldy snow fencing for their event.  Those days are over. With the Wave Delineator, your event looks polished, refined and worth the money.

For demonstration events such as safe routes to school or open streets, we’ve found decision makers and communities are more likely to approve infrastructure changes when demonstrations are stylish and elegant. Let’s be honest, no one is going to say yes to living in a construction zone.

The best part about the Wave isn’t its beauty, flexibility or ease of installation, it’s the fact that cars don’t hit it.

When driving past, the Waves create a solid visual barrier which drivers respect and take care to avoid. The Wave design is intuitive, polished, elegant and it gets the job done. 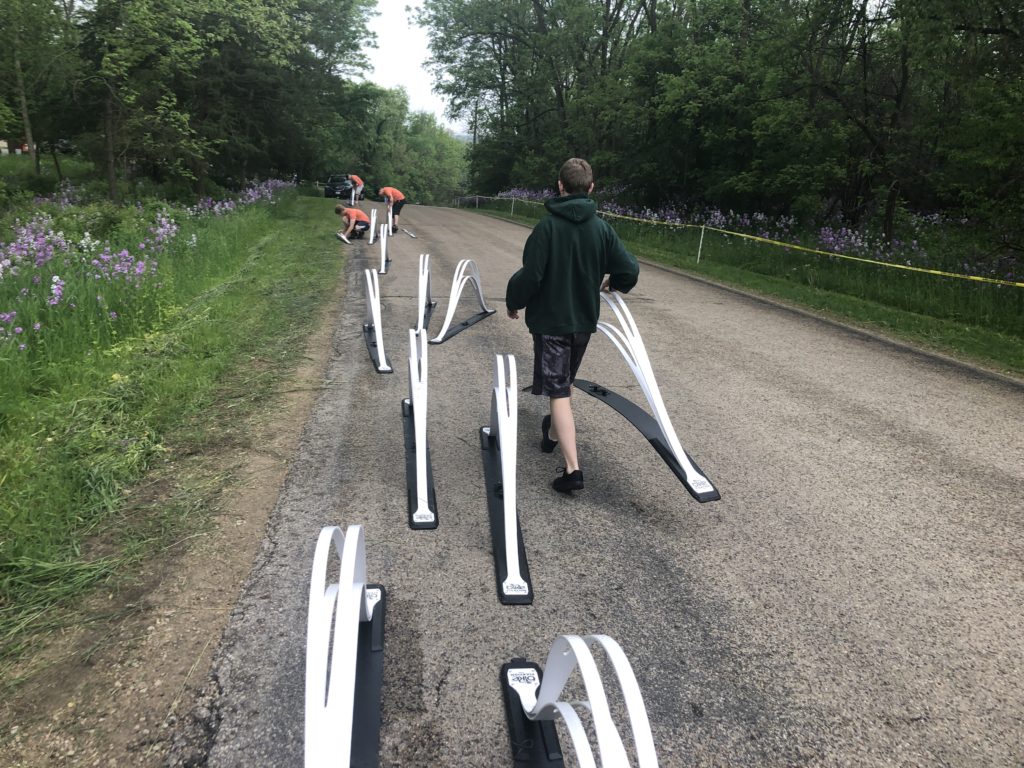 Volunteers were stoked to learn the Wave requires no tools or additional anchoring. Five Battle of CamRock volunteers deployed one hundred waves in approximately twenty minutes at a leisurely pace. The volunteers loved the easy installation and simple but innovative design.

The end pieces of each Wave nest together linking all the Waves together and delivering all the anchoring they need. Each Wave takes less than one minute to unload, stage, pop-up and link making it a very quick and easy installation.

The Wave is installed in four easy steps:

1.    Turn t-handles parallel to the base. The connecting plate will be turned out.
2.    Join end pieces together by pulling middle ends of black base together.
3.    Turn connecting plate so it fits in the opposite t-handle.
4.    Link individual Waves together using tongue and groove system.

FUN! Spectators, racers and bystanders loved the unique Wave Delineator. Kids of all ages were seen making the hand ‘wave’ motion as they passed and surreptitiously touching the wave when they thought no one was looking.

Aside from the fun factor, the Wave Delineator accomplished its mission. Spectators, particularly pedestrians with young children, were contained to the safe side of the wave while motorists enjoyed the driving side without chaotic pedestrians and cyclists darting in and out of traffic.

It kept racers and spectators safe from traffic and it controlled vehicles for parking. - Christopher Richmond, WORS Racer

It’s an innovative design, I think these should be everywhere.
- Scott H, Event Director

It’s portable, modular, lightweight, stable and I really like the fact that it has reflectors built into it. - Dave Reece, Battle of CamRock Event Director

It’s really about community and keeping everyone safe so they can enjoy the event. The Wave Delineator is pretty great, and the Saris Repair stands were a good thing to have on site. - Chris R. WORS Racer

Saris Event Infrastructure:
If You Build It, They’ll Use It

It started as an office debate: If given a choice, would cyclists use a public work stand or the tools they carried with them for a trail side repair. The office was split, to settle the debate, we took our Deluxe Public Work Stand to the Battle of CamRock in Cambridge, WI.

Racers commented on how nice they thought the stand was, from the smooth action of the retractable tools to the custom decals to the stainless pump with accurate gauge. We are pleased to report that every cyclist who used the stand was able to successfully fix their issue with the tools provided on the Deluxe Public Work Stand. From replacing a tube to removing a kickstand 10 minutes before the kids race start, the Deluxe Public Work Stand did it all.

Despite most cyclists carrying their own tools and air pumps, if given the opportunity, they will choose using a convenient public repair stand over digging in their packs for their own tools.

Check out the Event Gallery below for more pictures of the Wave Delineator and Deluxe Public Work Stand.Contact us today to learn more about Saris Event Infrastructure. 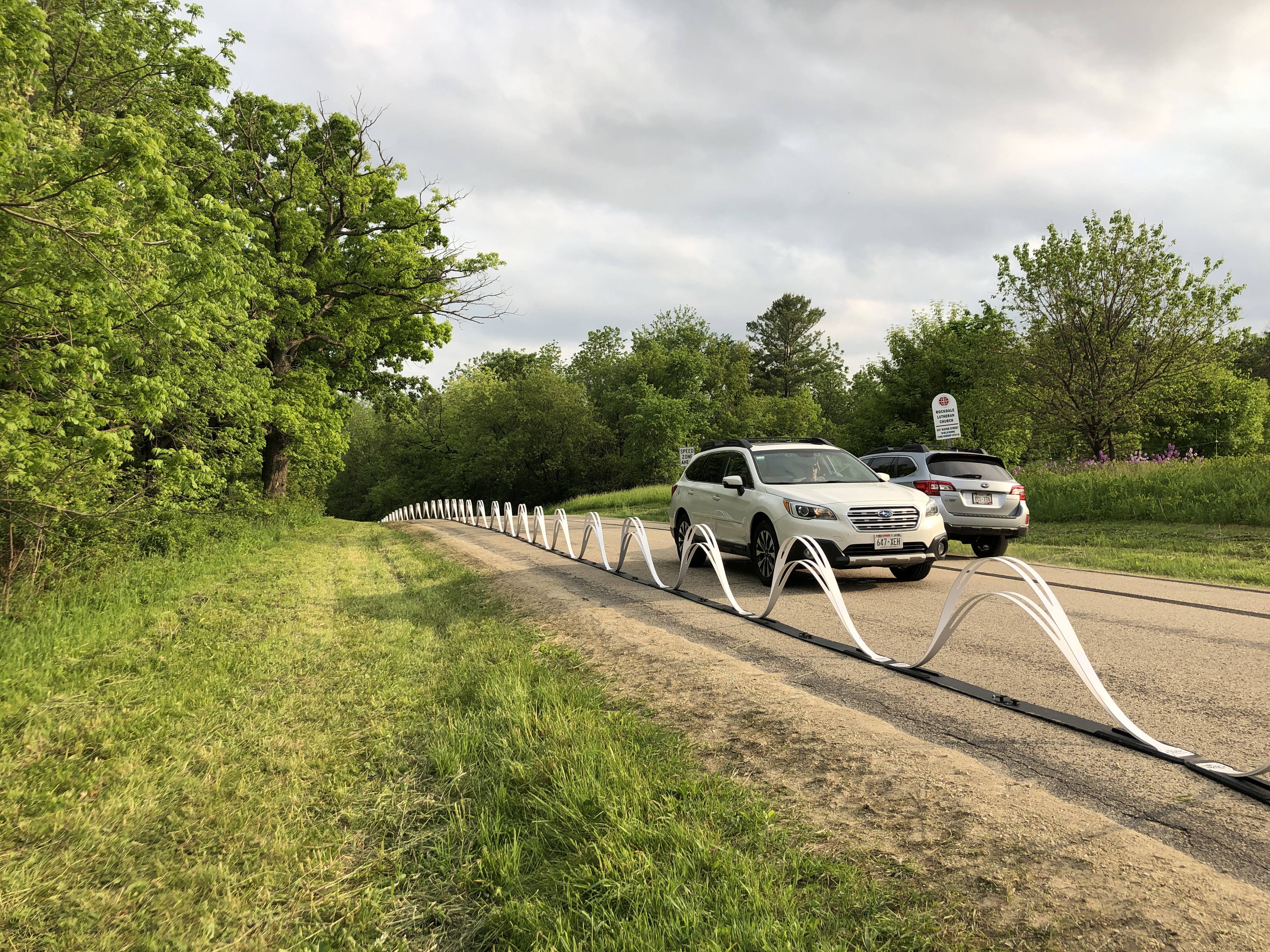 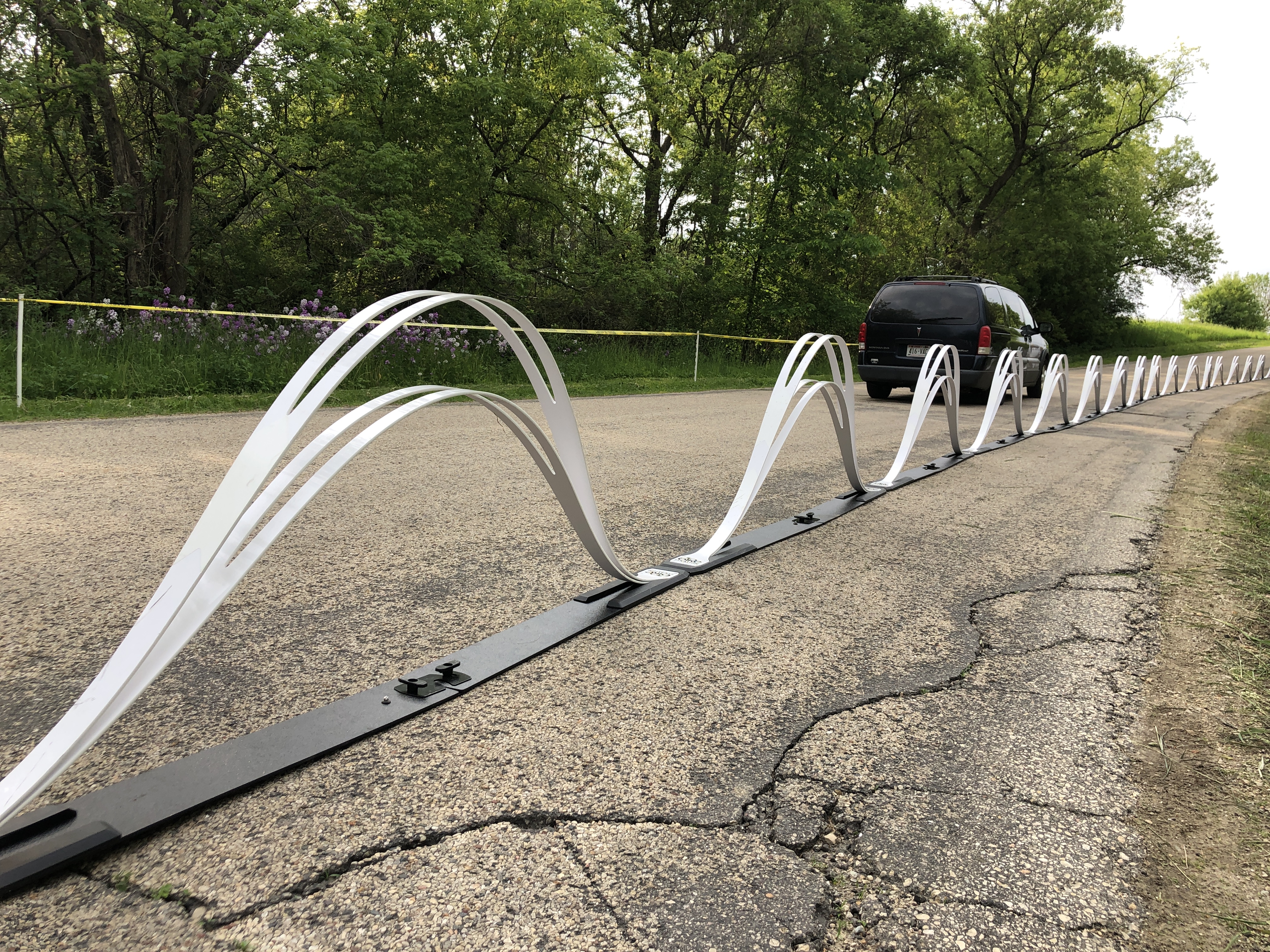 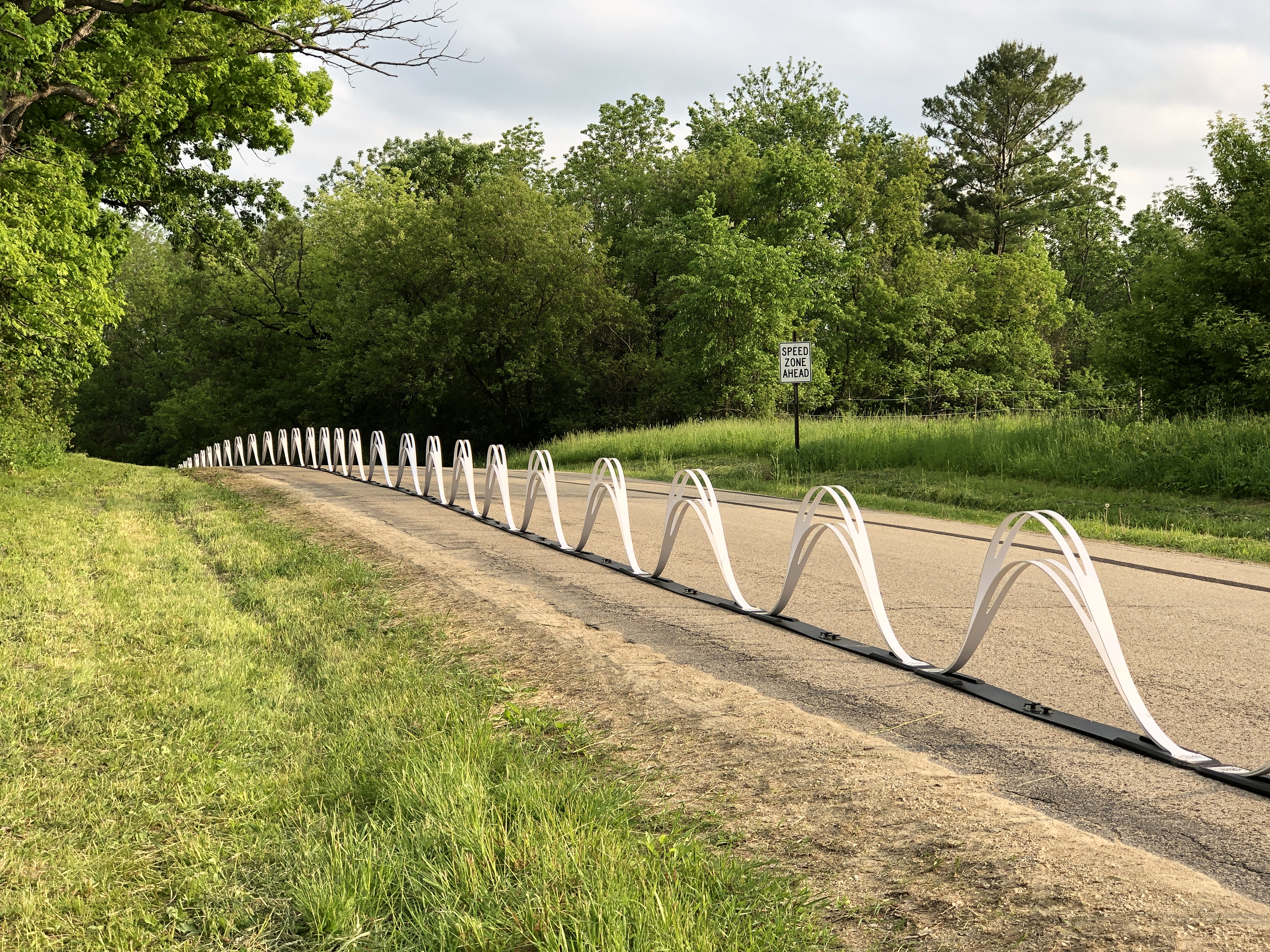 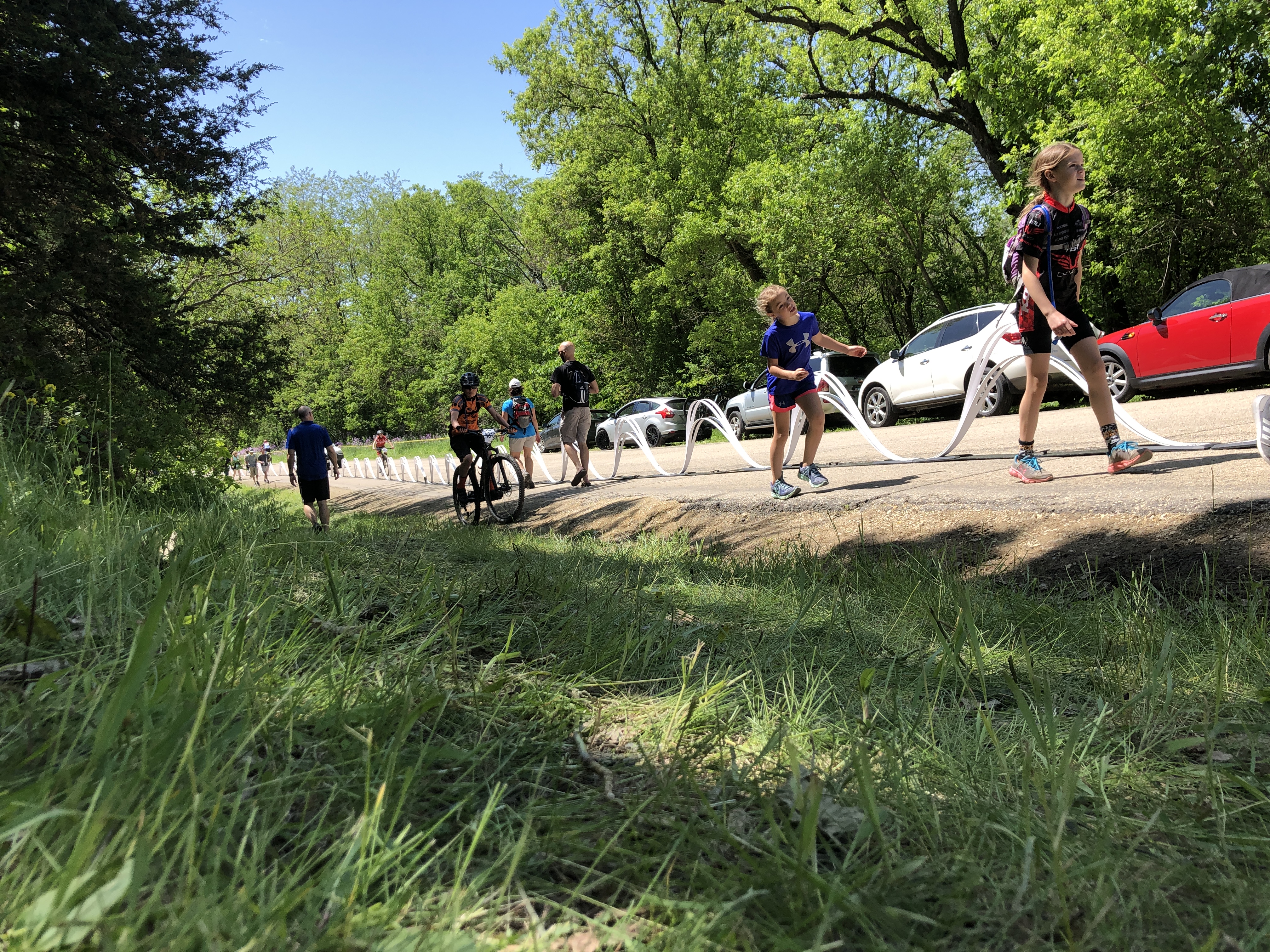 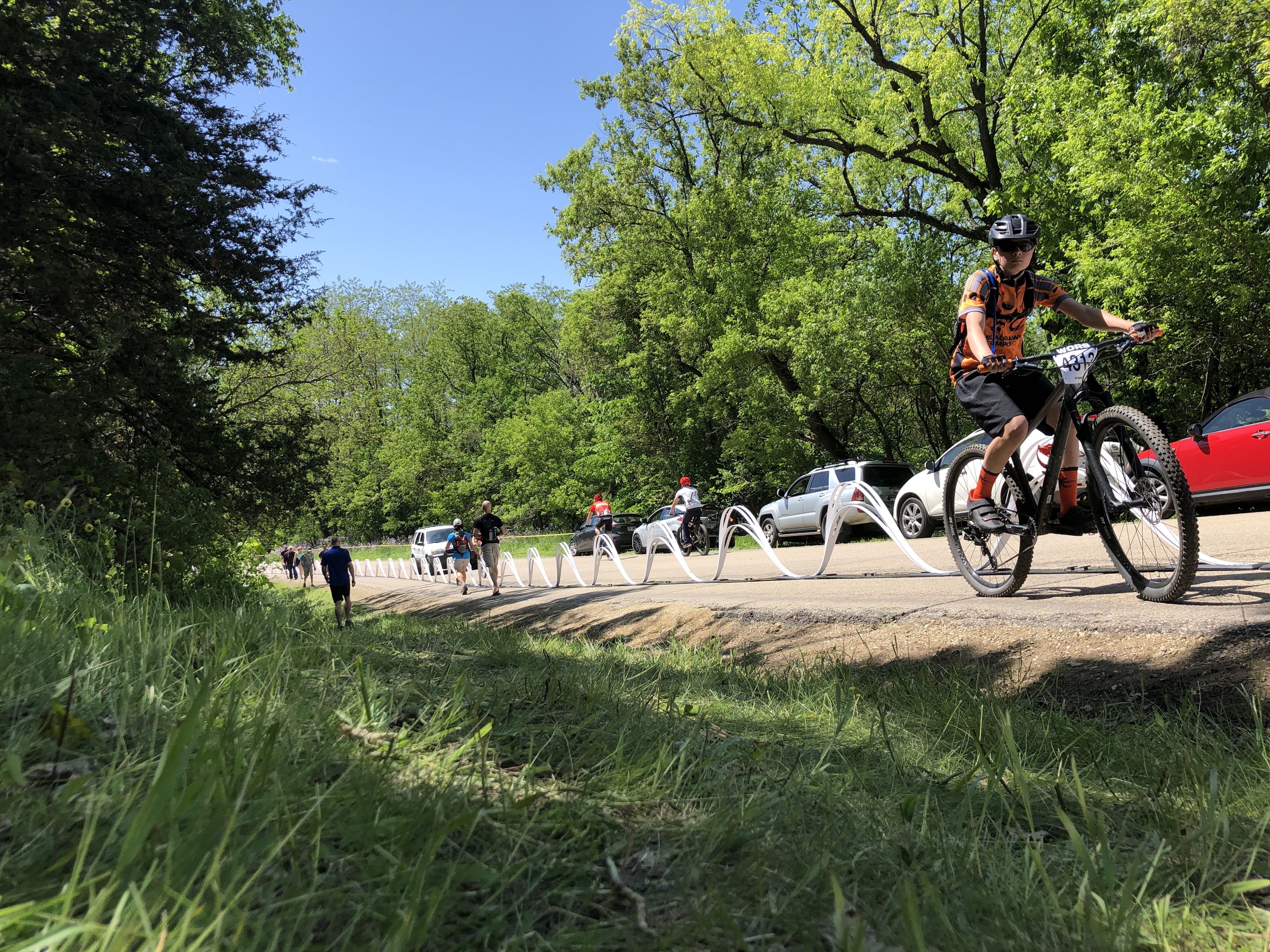 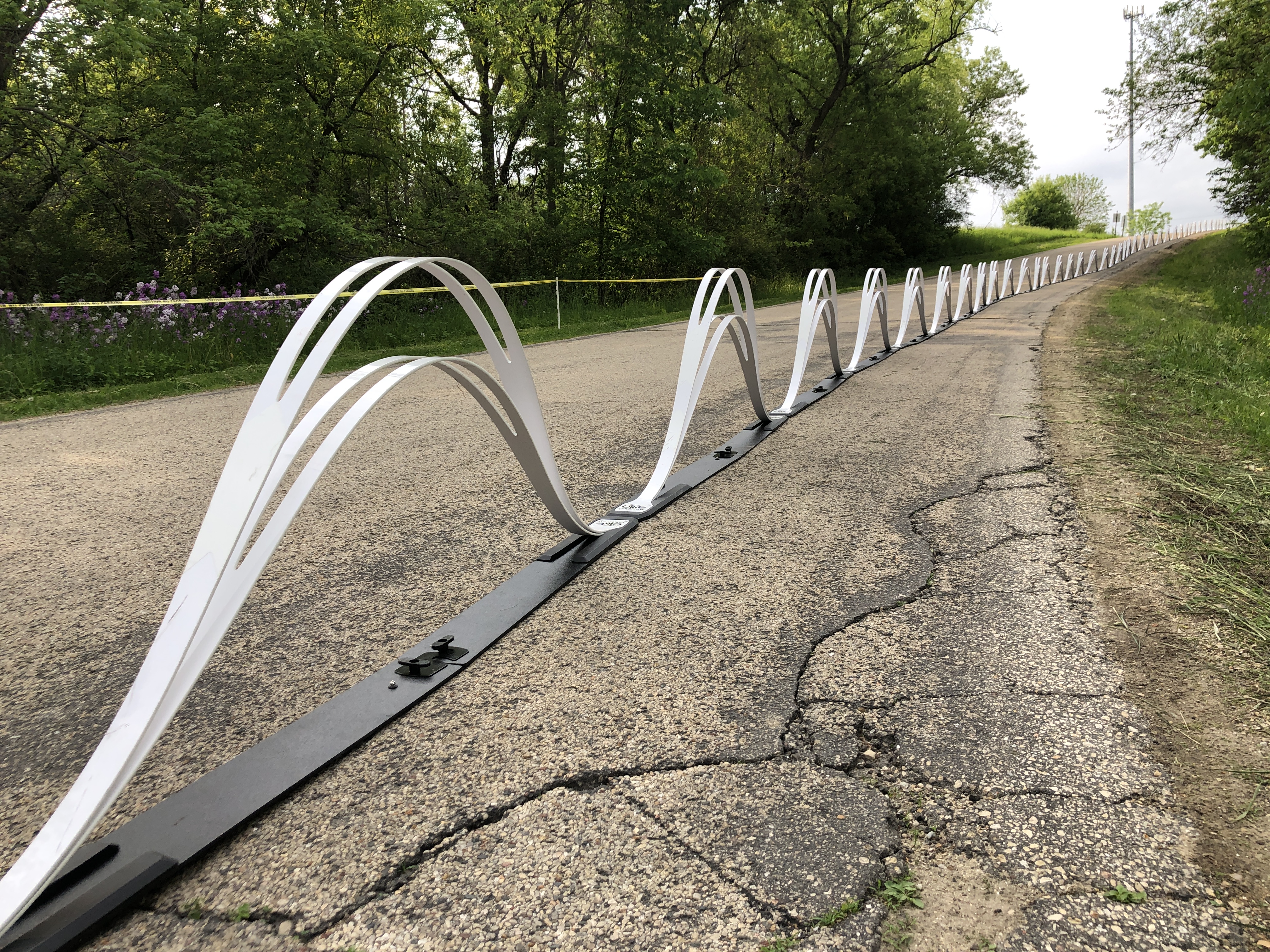 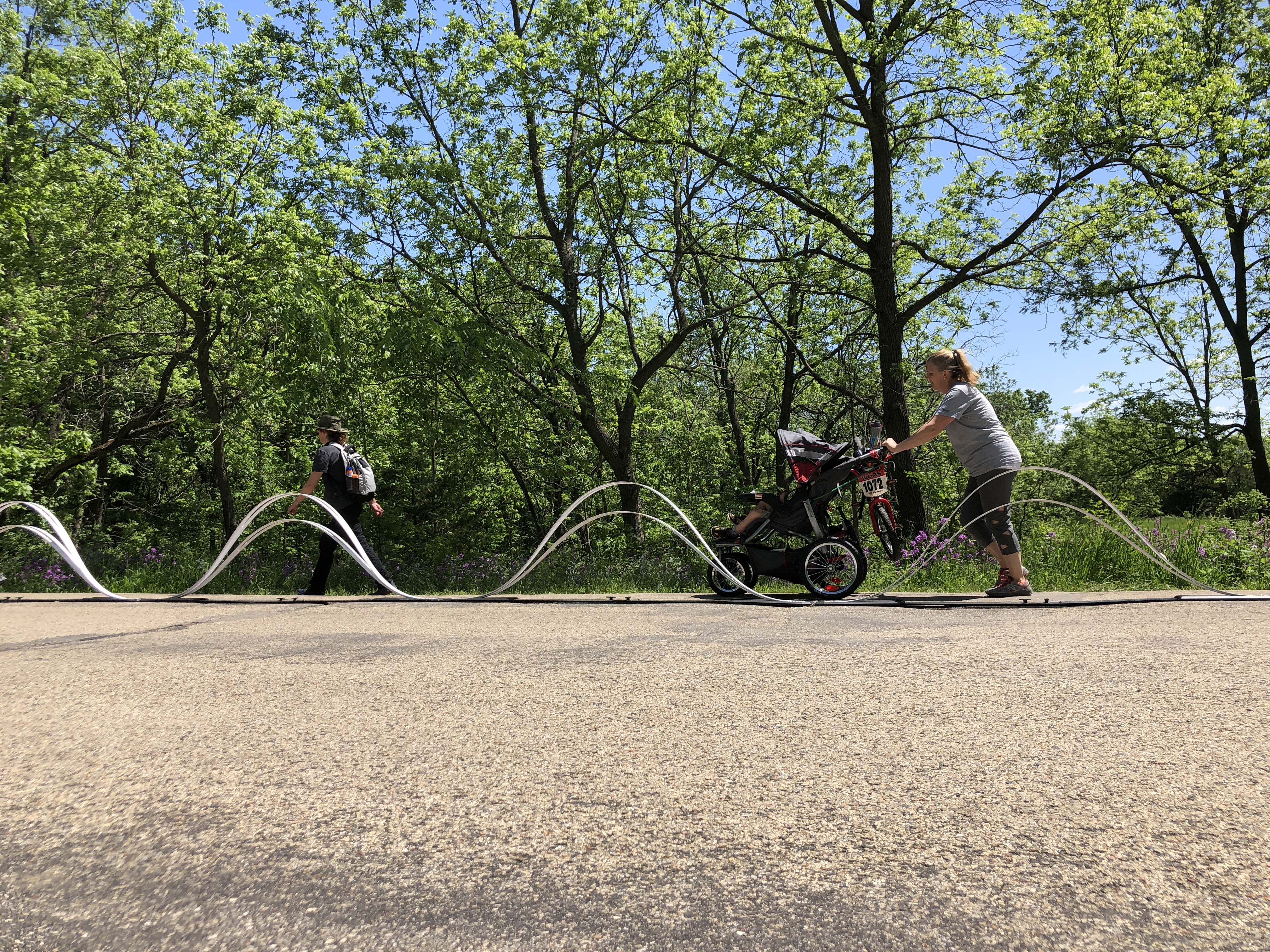 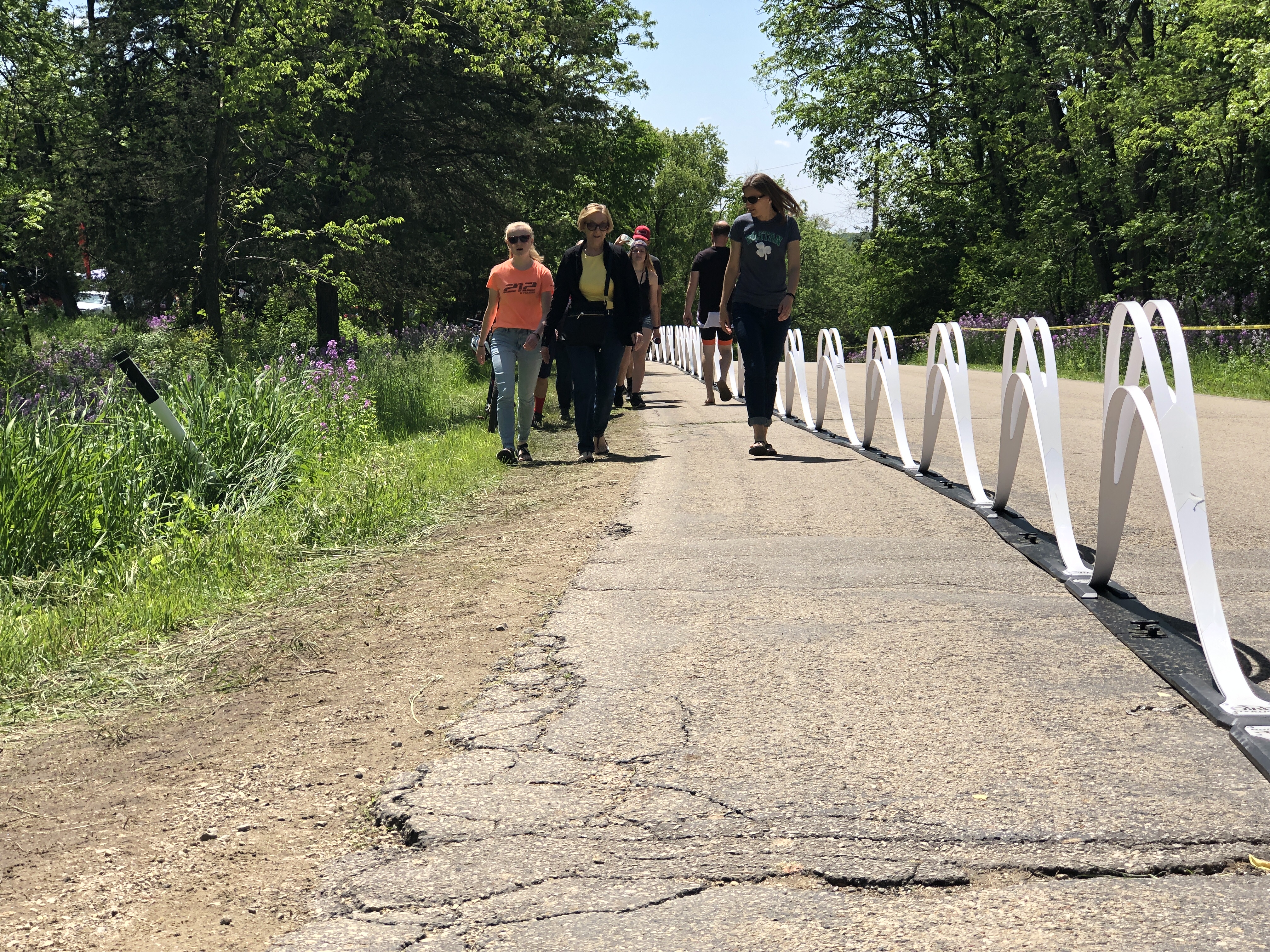 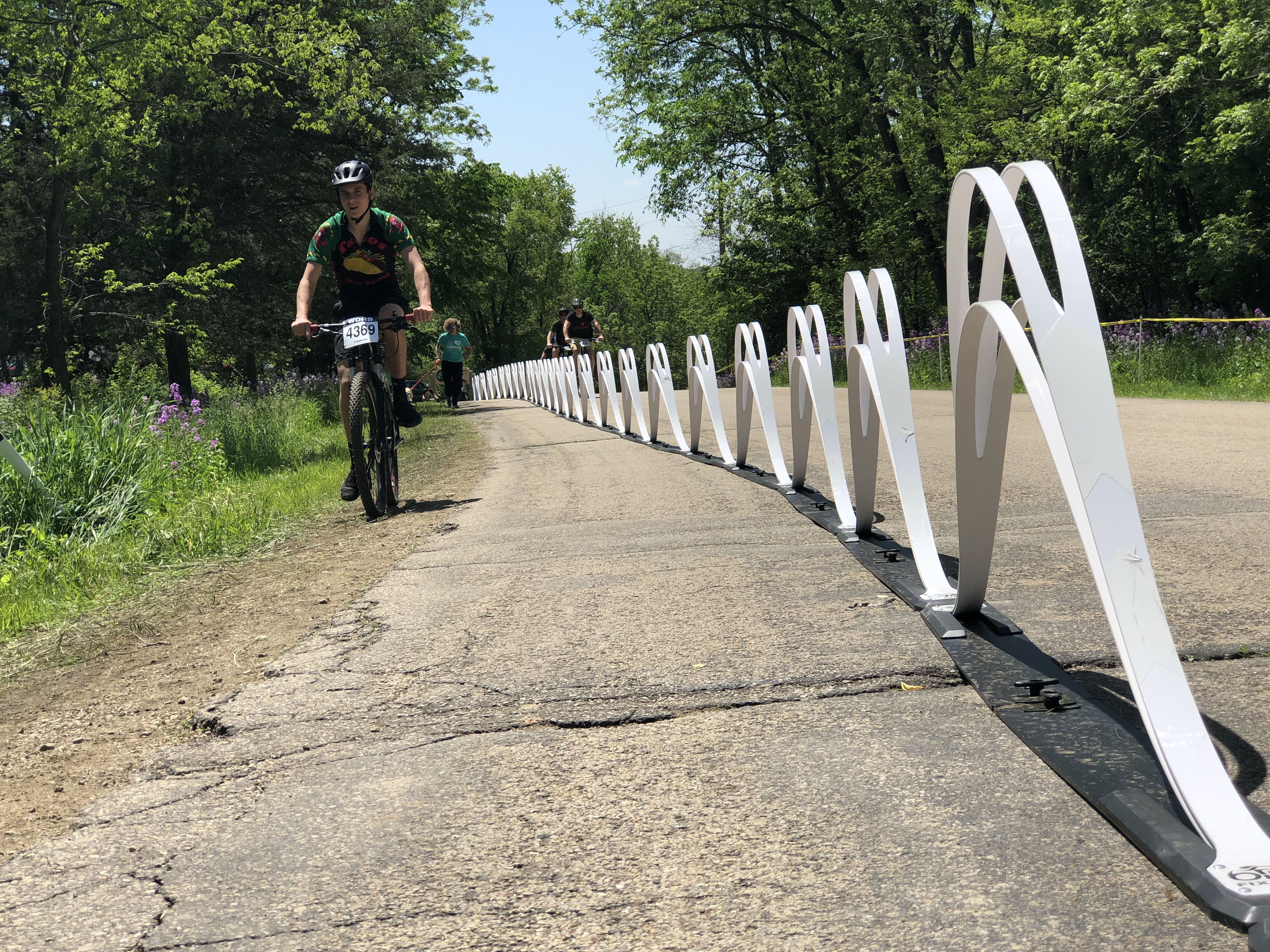 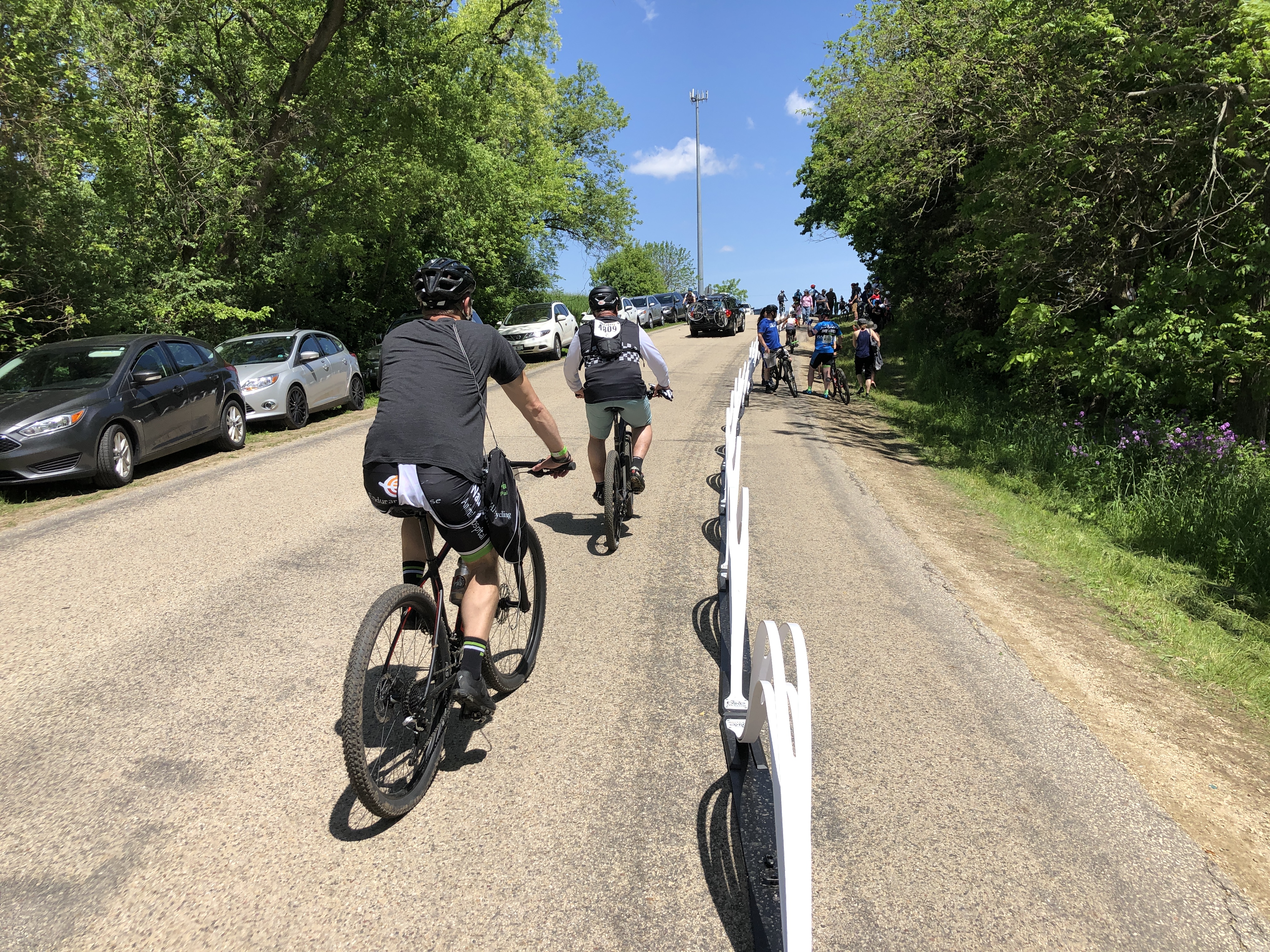 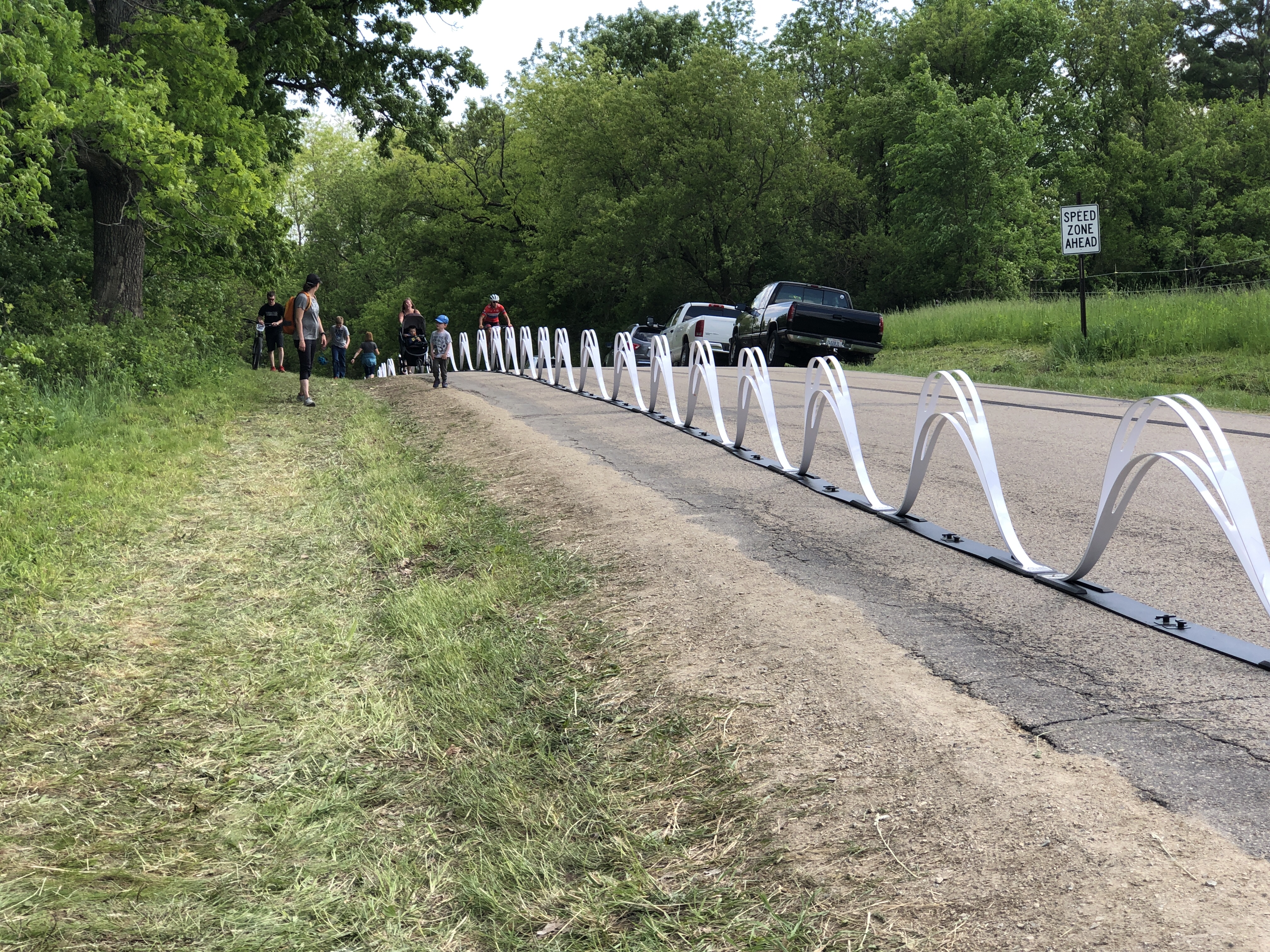 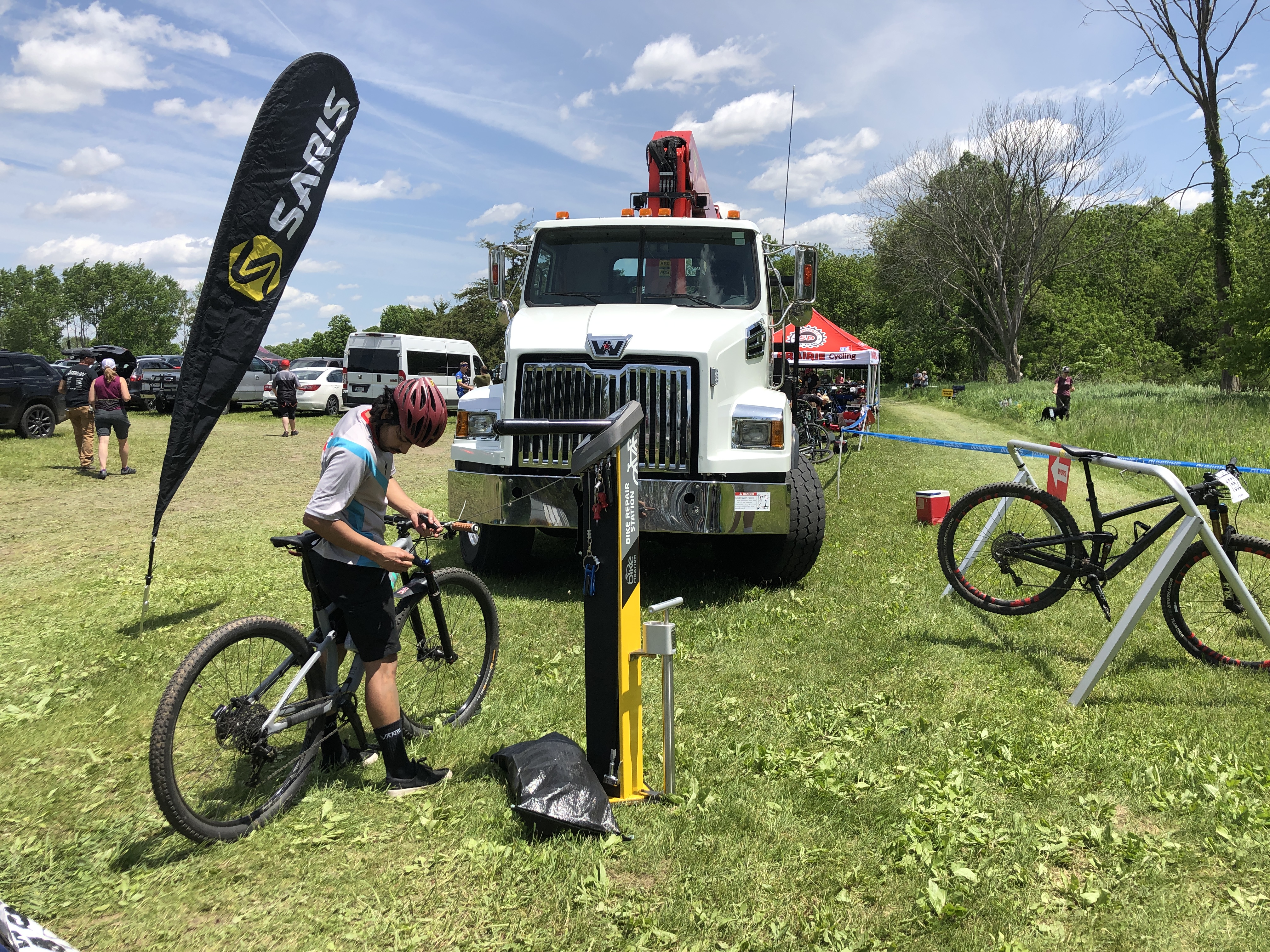 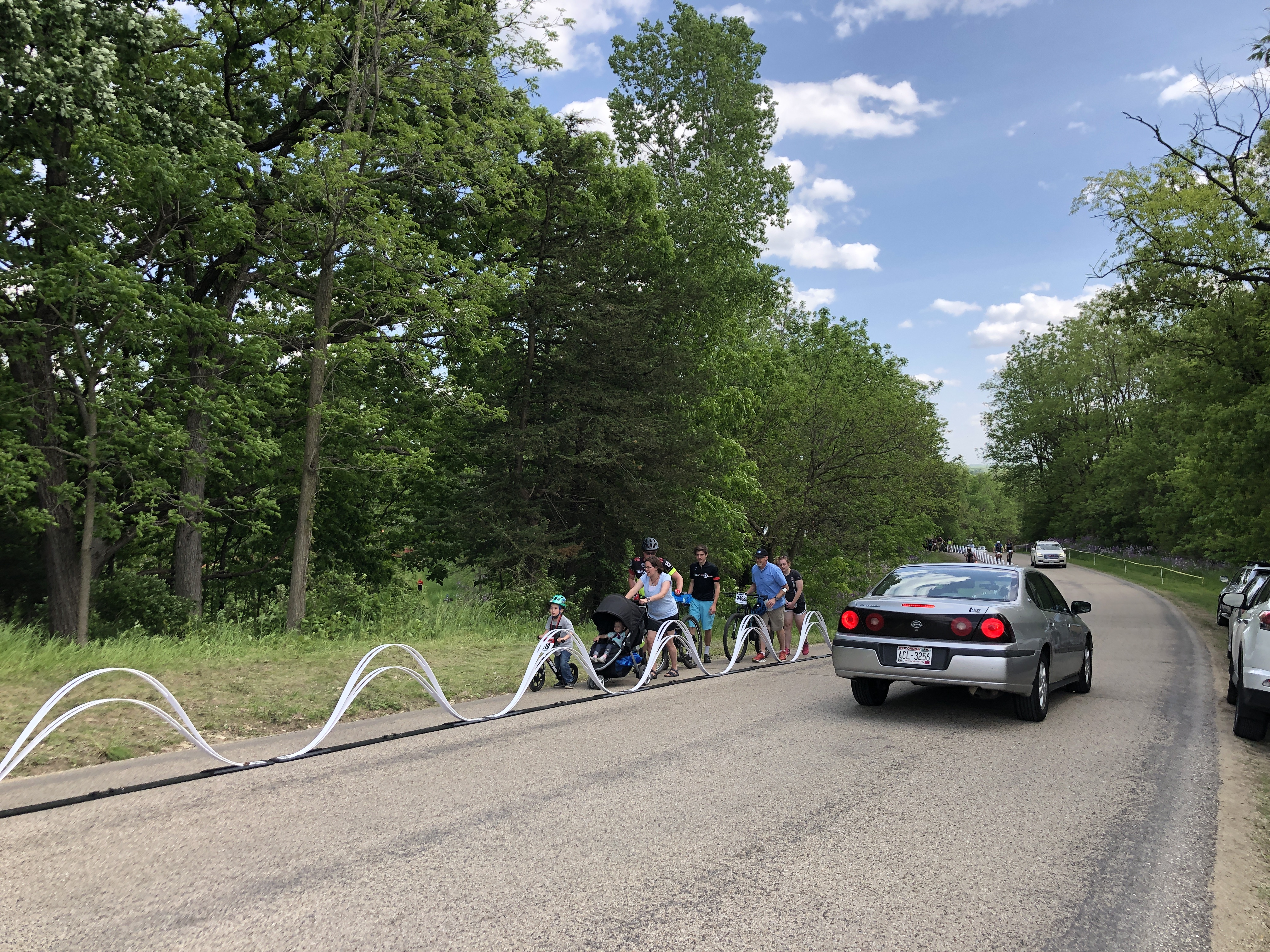 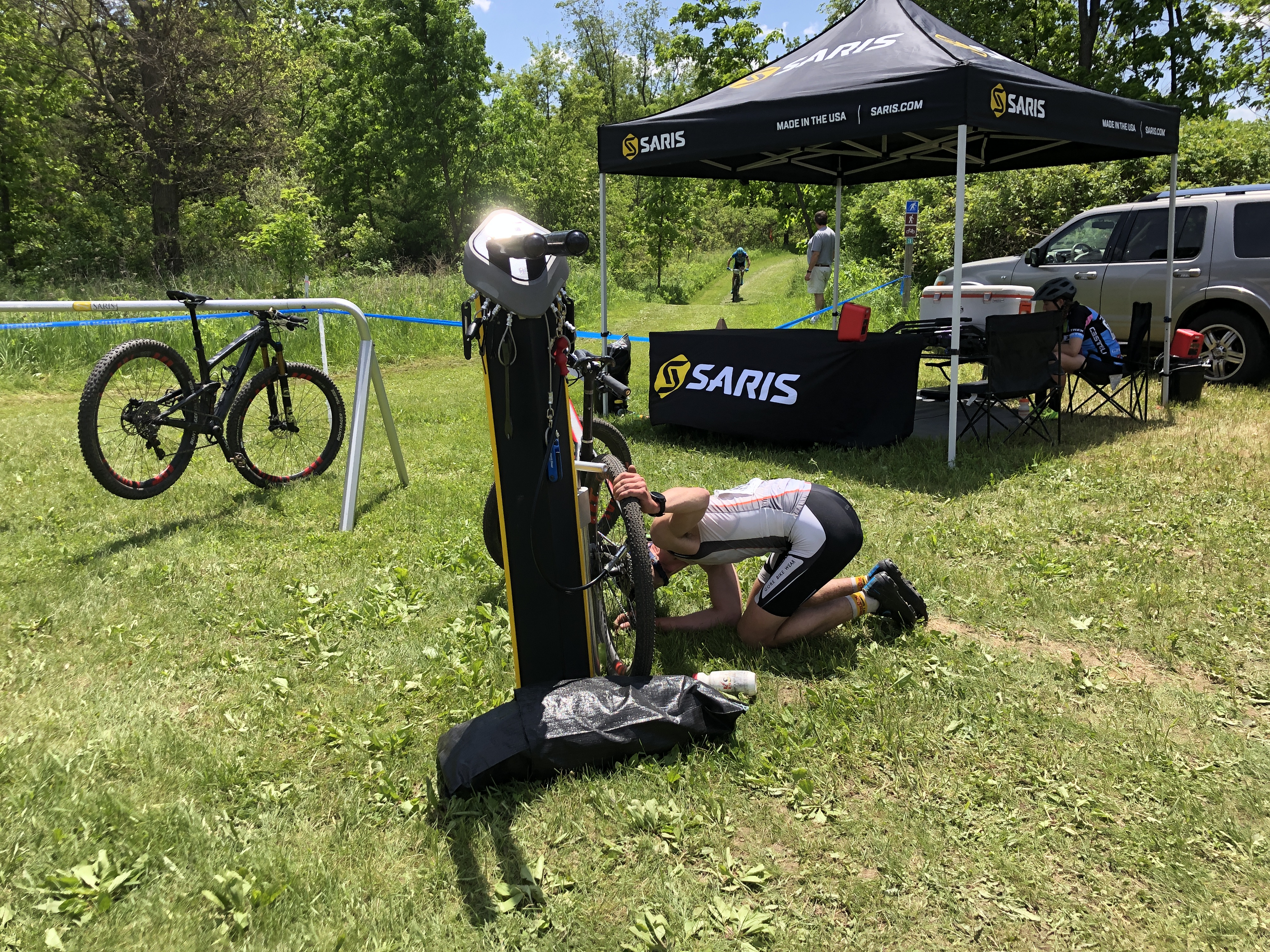 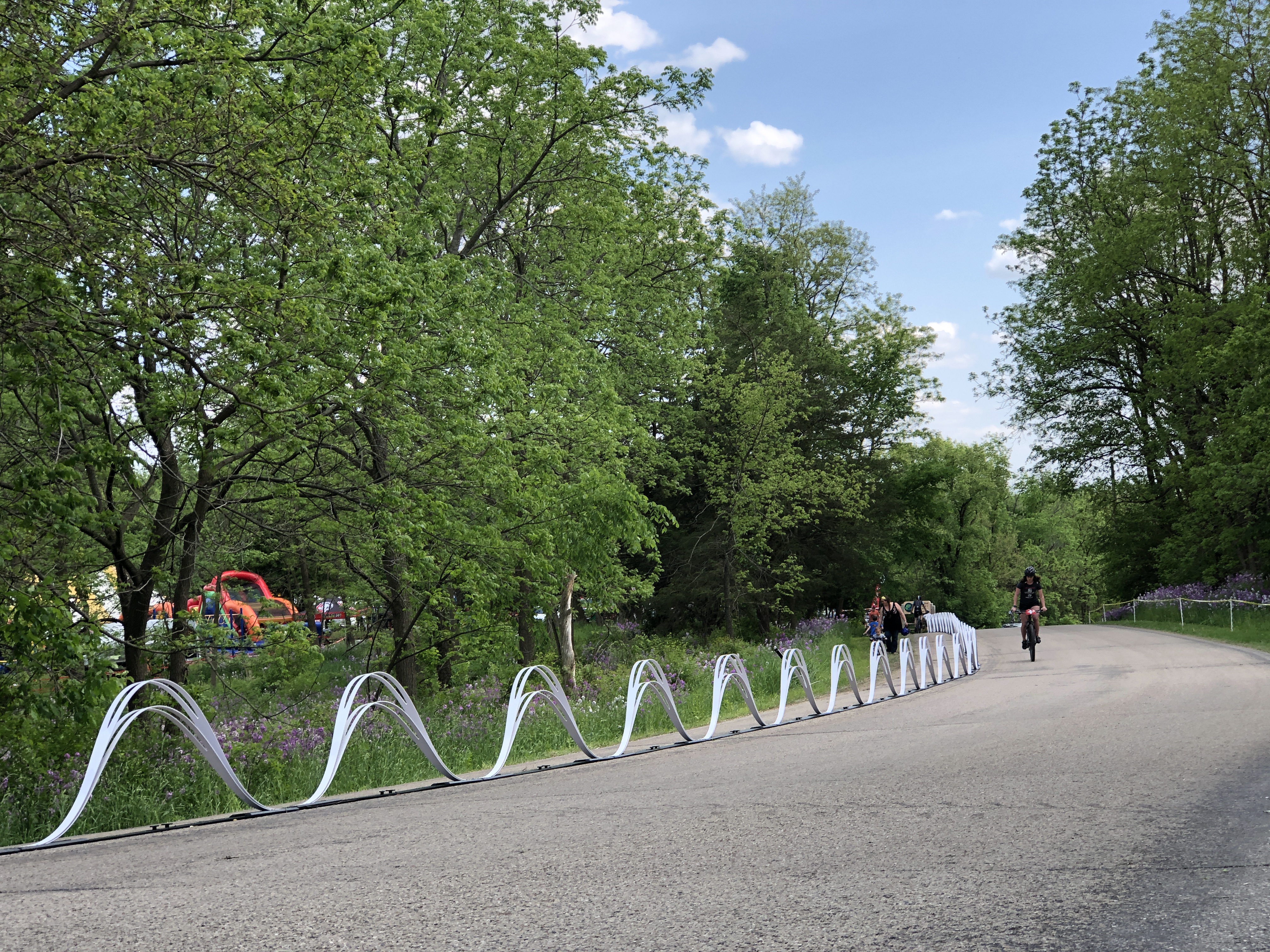 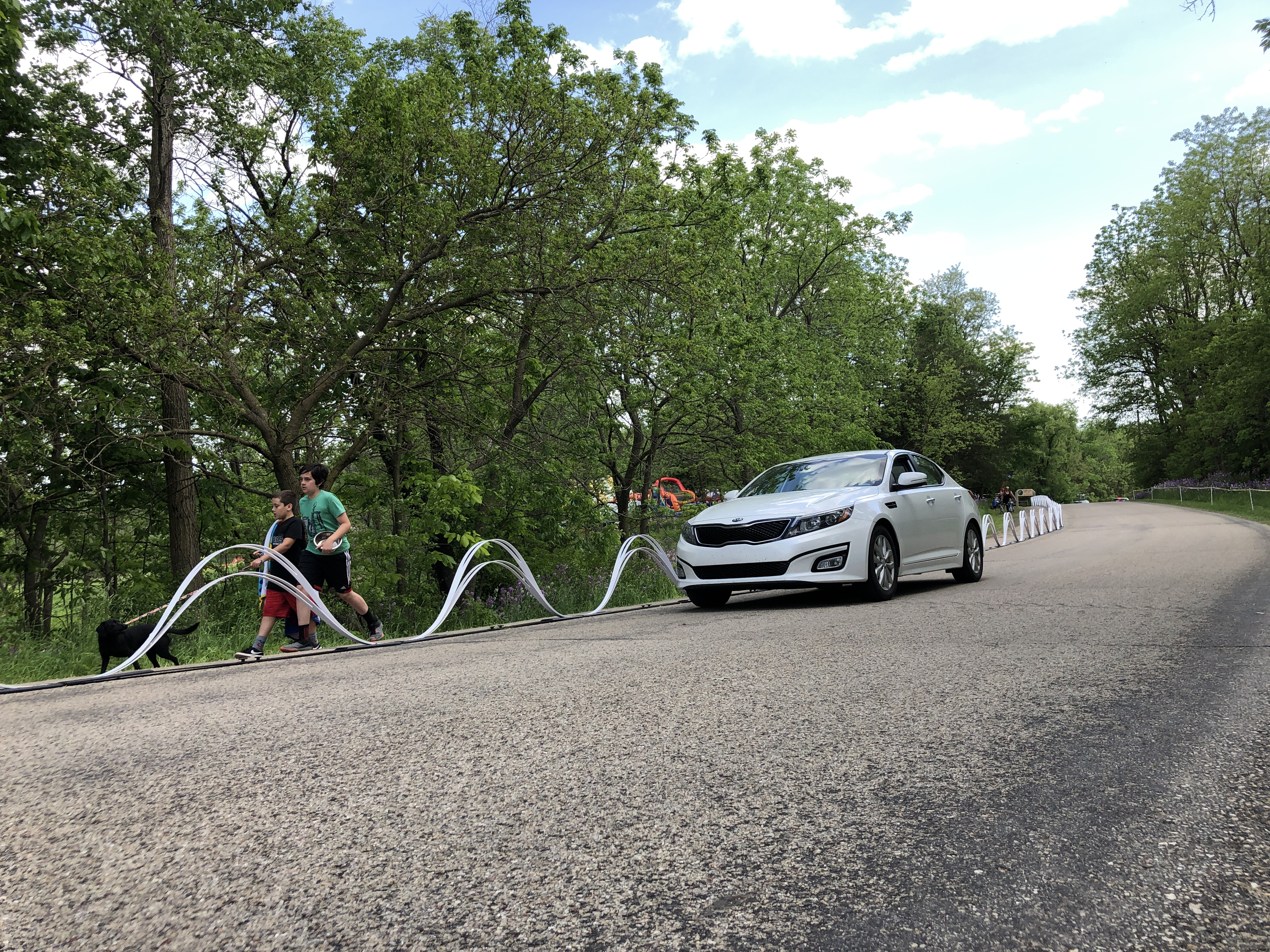 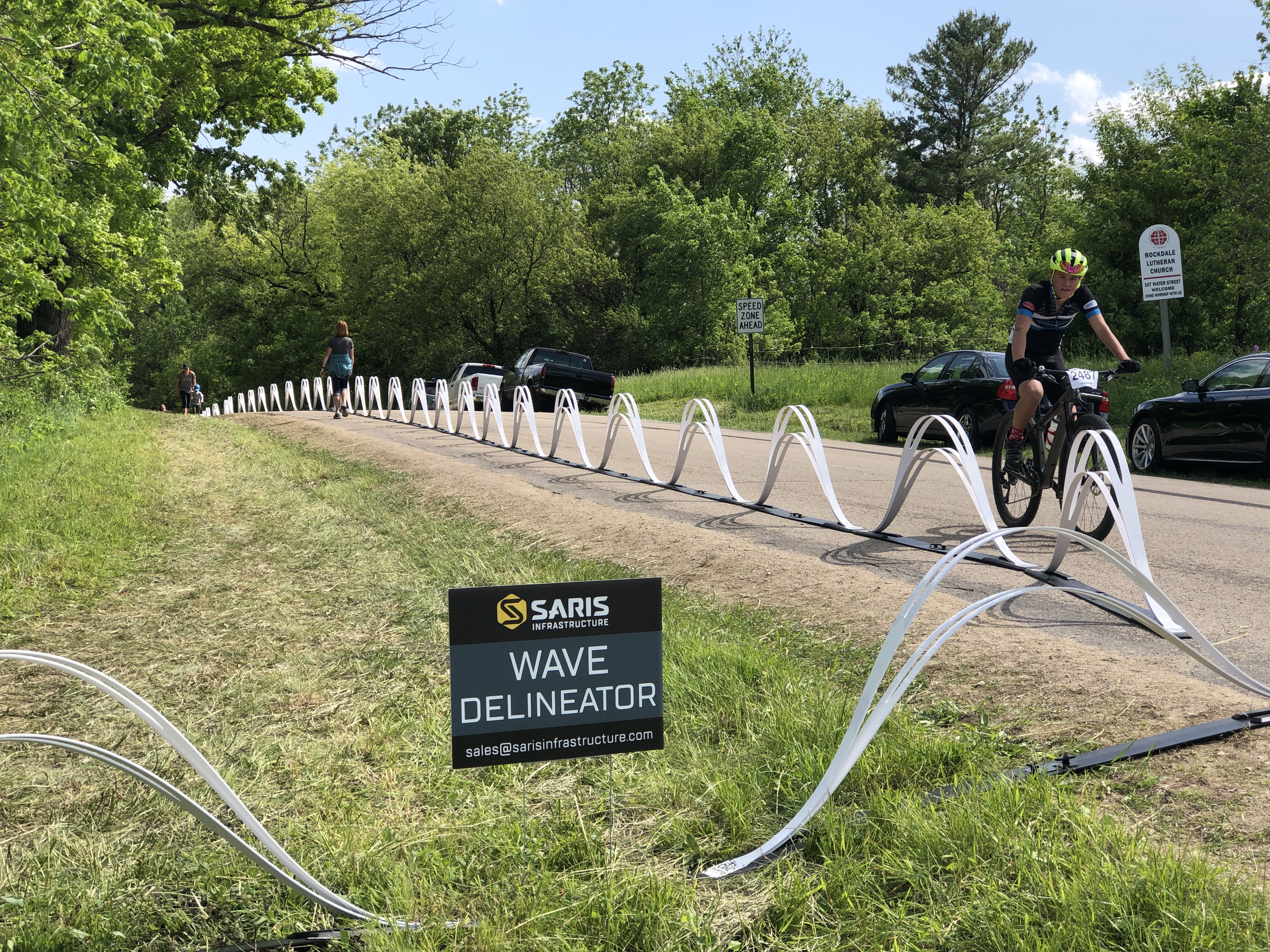 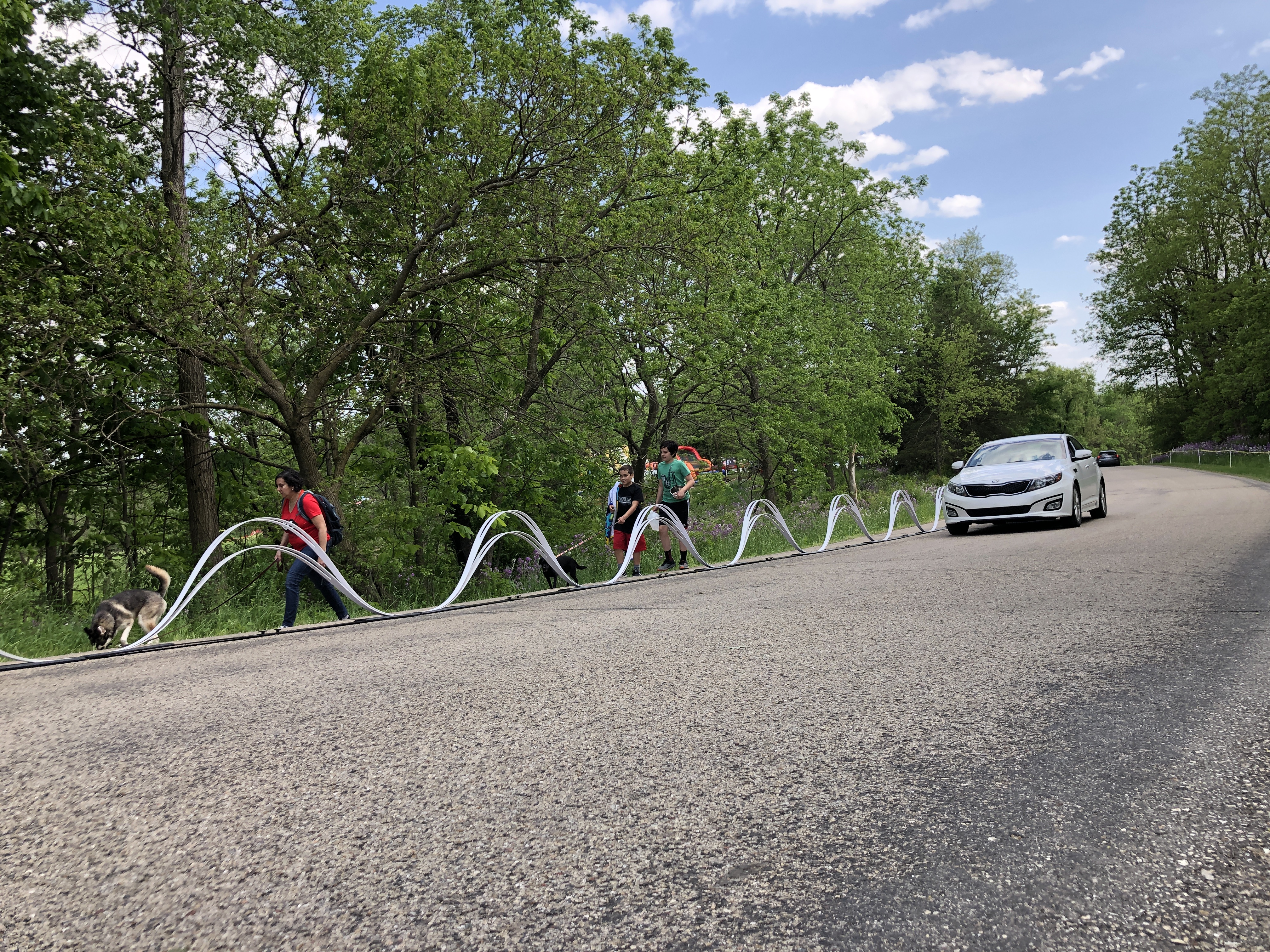 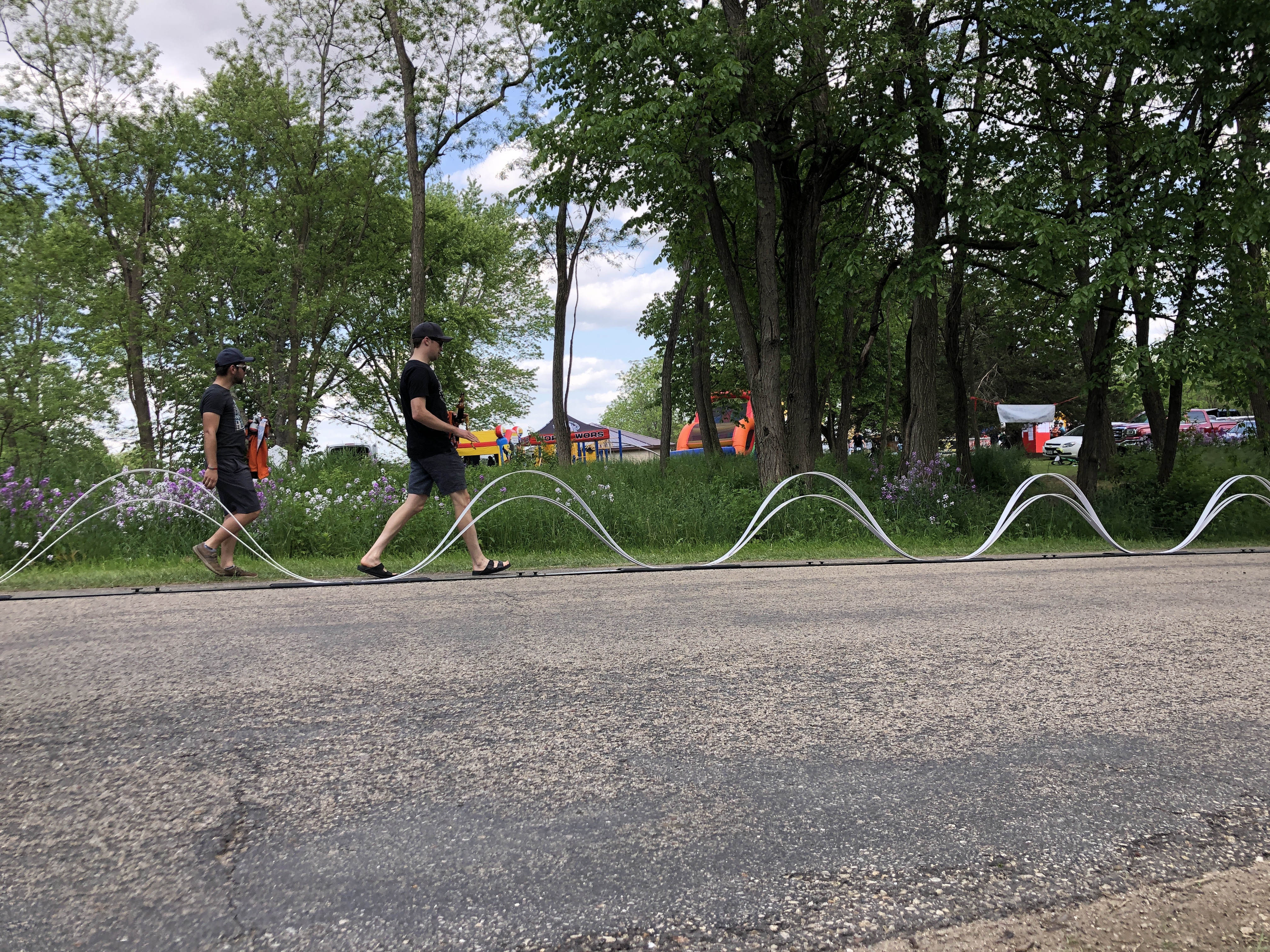 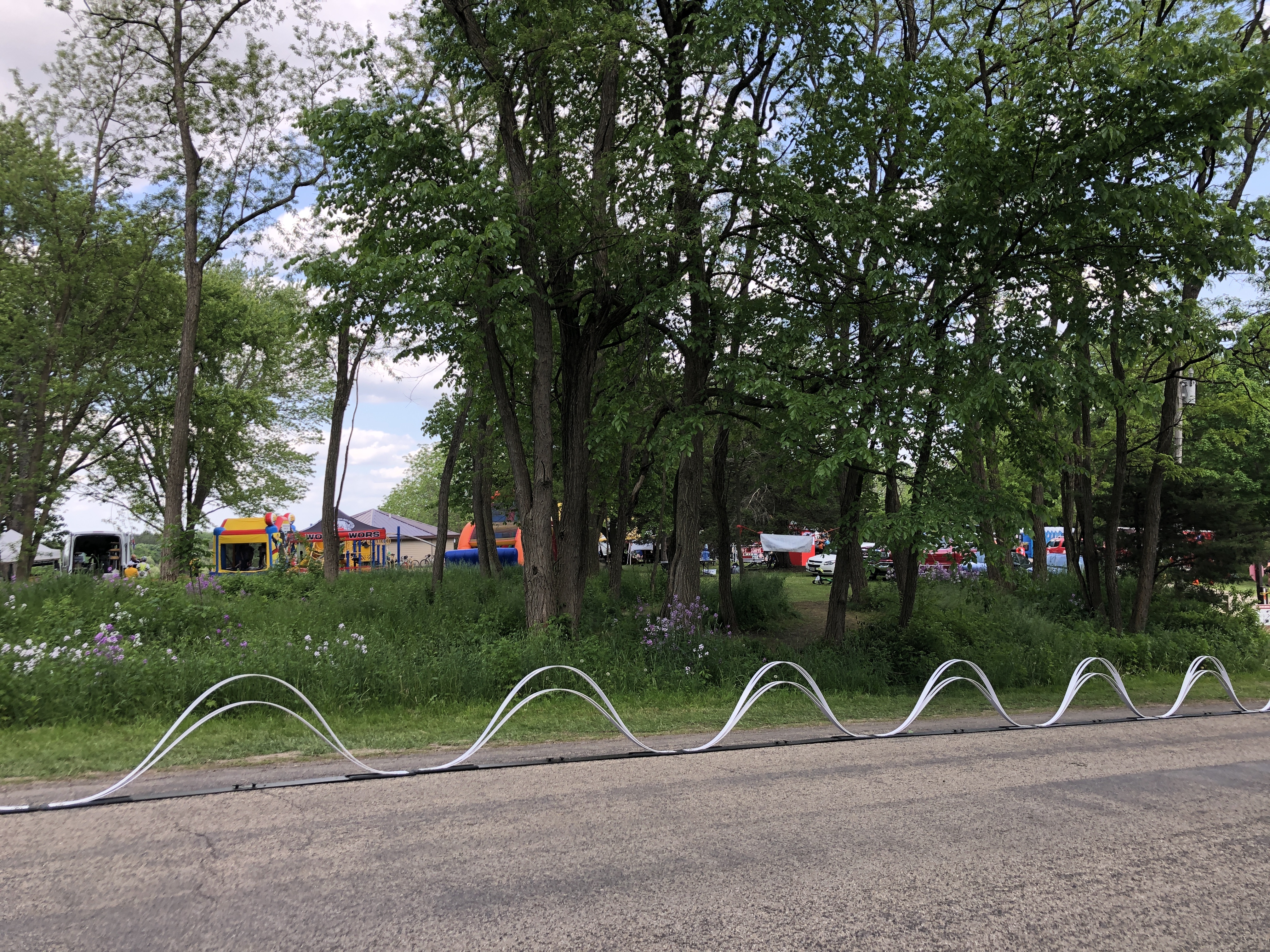 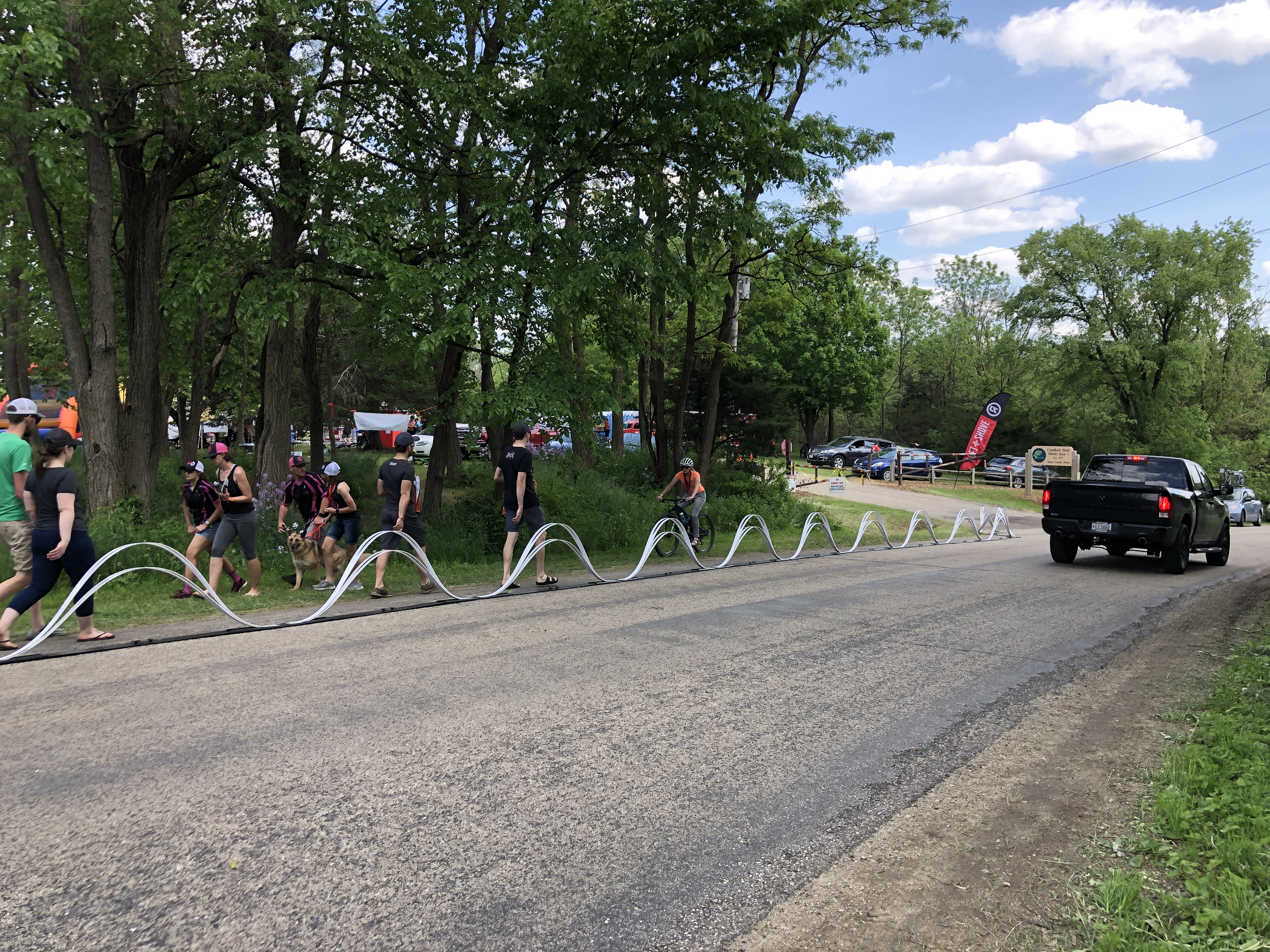