Home > Blog > Riding the Wave with the Wave Delineator

Riding the Wave with the Wave Delineator

What started as a fun side project to make bike lanes beautiful has blossomed into something much larger and more significant. 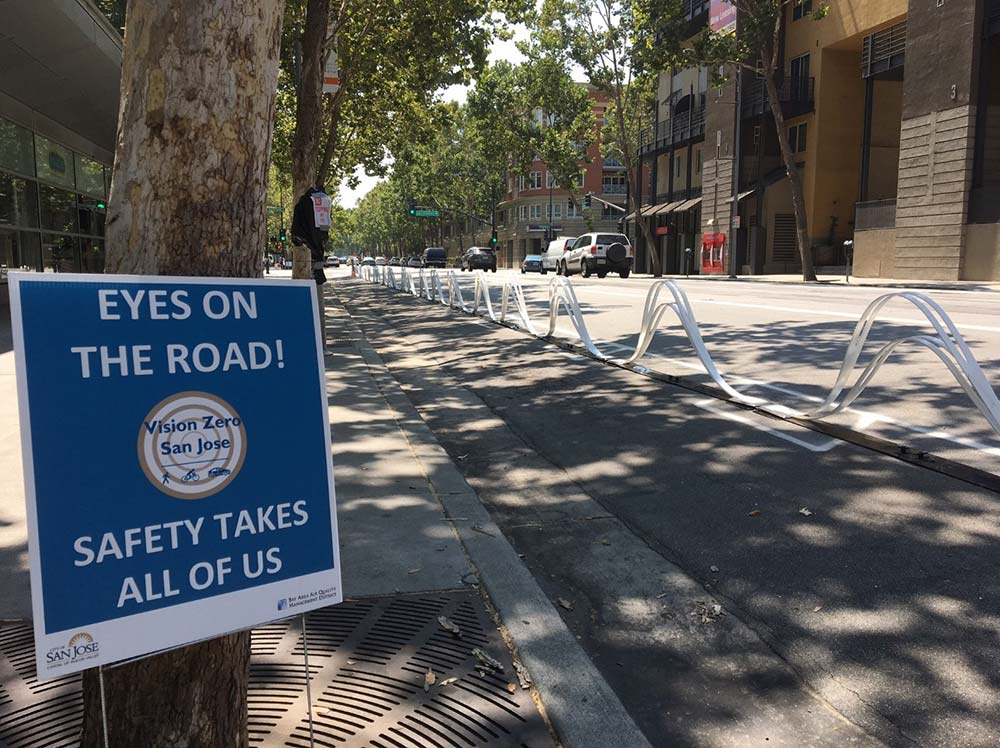 It started with a straightforward yet challenging question: Could we design a product that makes bike lanes feel fun and enjoyable? Then came the inevitable follow-up: Does it matter? The answer to both it turns out, is an emphatic yes.

In collaboration with the Los Angeles Department of Transportation and Gensler Architects, we set out to design a temporary lane delineator that makes pop-up or demonstration bike lanes feel fun and inspiring. A common complaint from bicycle planners and advocates is that their tool-box for pop-up bike lanes is woefully inadequate. Separating the bike lane with flex posts, traffic cones, and DIY materials can often leave the space feeling unpleasant and unsafe.

Could Bike Fixation, with our expertise in designing best-in-class bicycle infrastructure products, and Gensler Architects, a global leader in building and product design that’s shaping the future of cities, combine our collective talents to deliver a solution that would help make bike lanes resonate as a thing of beauty and enjoyment? 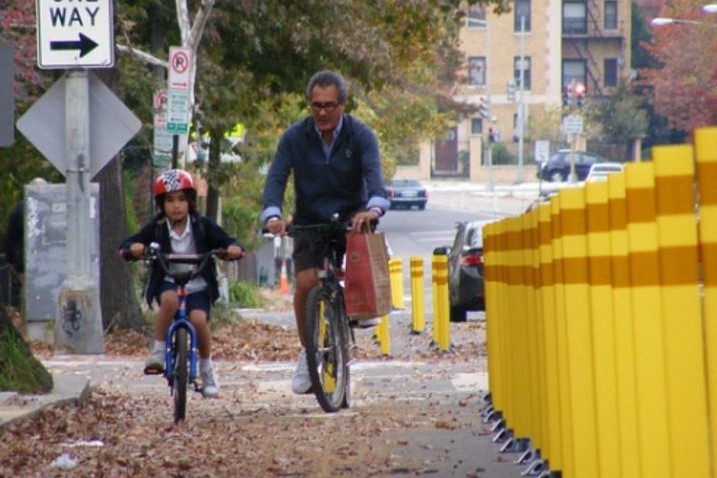 Does this look like an enjoyable space to bicycle?

How the Wave Was Born

We started with a simple but elegant wave aesthetic. The curvature and fluidness inherent in a wave help visually soften the lines between spaces. The “hard” divide that is created by bollards and cones creates a construction-zone feeling, making the space feel uncomfortable and inferior.

The continuous or rolling rhythm of a wave conveys a feeling of motion, calmness and engagement that is amplified by the slower speeds at which cyclists are traveling. And by layering the waves, the depth is enhanced; allowing greater visibility for both adjacent drivers and bicyclists. 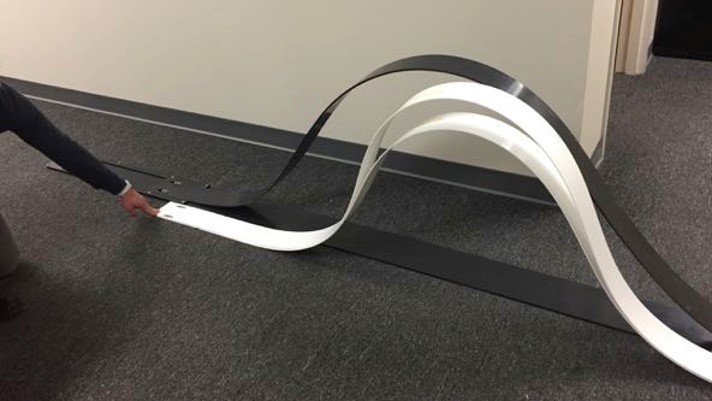 After settling on the aesthetic, the work to make the product functional began. Understanding all the various use cases became critical. With guidance and expertise from Los Angeles DOT engineers and planners, we targeted the features that were essential to making the delineator easy to use.

Features like collapsibility, reflective decals, light weight, and chamfered (rounded) edges helped address common complaints of existing products. Our delineator had to not only look good but be intuitive to use too. 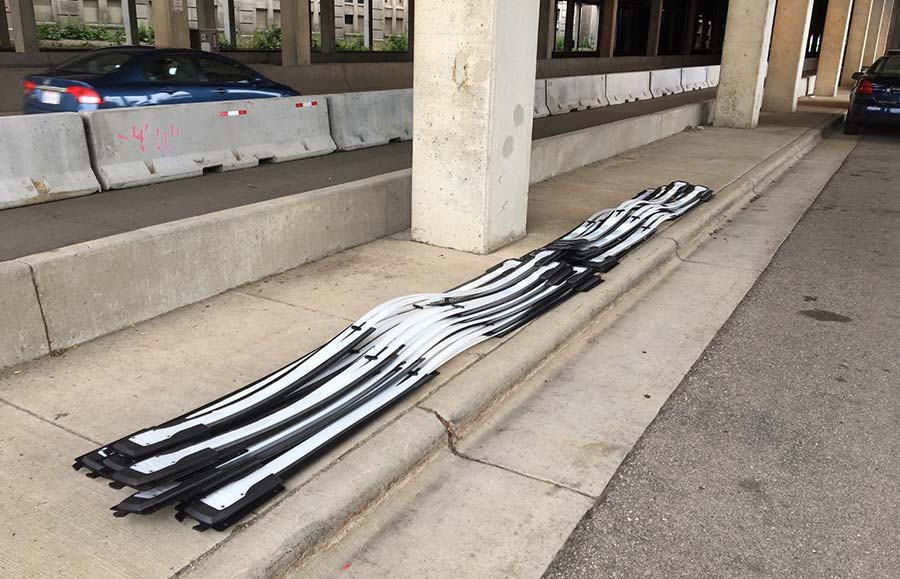 Waves ready for installation in Madison.

What proved to be the most challenging and time-consuming was finding the right materials. Hundreds of hours were spent testing materials which would provide the perfect combination of durability, stability, deflection, and environmental performance. Using both internal and external testing facilities, we put the delineator through a battery of environmental and strength tests. It did not pass every test every time, so we would iterate and try again. After months of testing, we finally produced an end-product that met all our exacting standards. Next it was time for the public to weigh in. 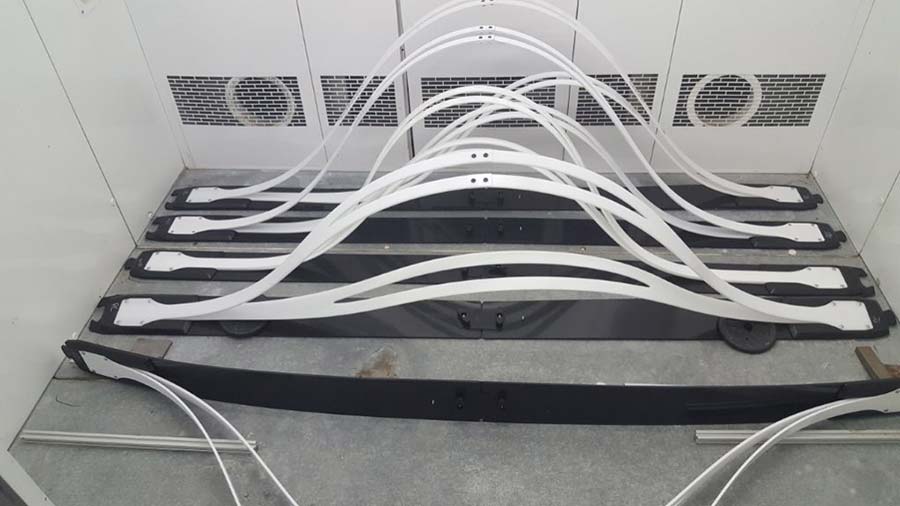 Heat chamber helping determine which plastic can hold up to high surface temperatures.


The Wave Hits the Streets

Starting with a Complete Streets demo in San Jose, CA, the delineators crisscrossed the country, deployed in multiple scenarios from a single day Open Streets event in Philadelphia, to a months-long protected bike lane project in New Orleans. The goal of these half-dozen pilots was to get feedback not only from the implementers and installers, but also from both cyclists and drivers.

Using intercept and online surveys, we collected a trove of overwhelmingly positive feedback about how people felt about the product. Comments such as, “I like that we are open to hosting pop-ups like this for experimentation and feedback. I loved the wavey delineators (as opposed to soft-hit posts),” were common from both vehicle drivers as well as cyclists.

In addition to the positive comments specifically about the product, we noticed a theme developing. Many of the comments alluded to the fact that the delineators made them enjoy experiencing the bike lane in a way that seemed different from normal pop-ups. “A huge smile formed on my face when I hit the wavey section. These are great!” came from a cyclist during the San Jose pilot.

We began to hypothesize that using the Wave Delineator impacted the success of demonstration projects positively by making the cycling experience within the pop-up more enjoyable and fun, in turn, building community support for more permanent infrastructure. 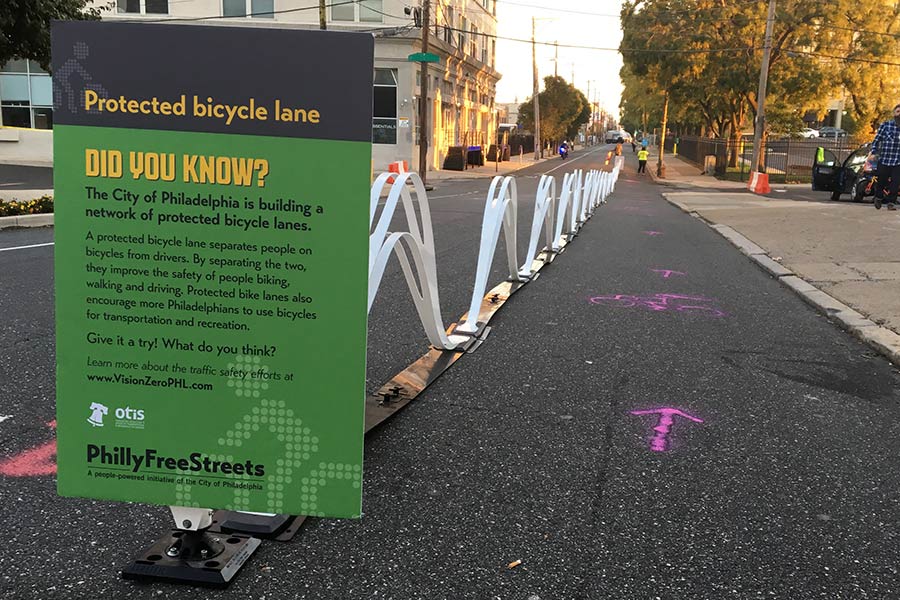 Advocates for safe cycling can be any age.

What started as a fun side project to make bike lanes beautiful has blossomed into something much larger and more significant. From galvanizing public support for protected bike lanes, to creating temporary bicycle travel lanes at large events, to assisting families in neighborhoods with no bike infrastructure safely access local farmers markets, the Wave Delineator has married form and function in a way that is nothing short of revolutionary in this space. We hope “Riding the Wave” will become an integral part of every pop-up, Cyclovia, game-day, demonstration, or pilot across the globe! 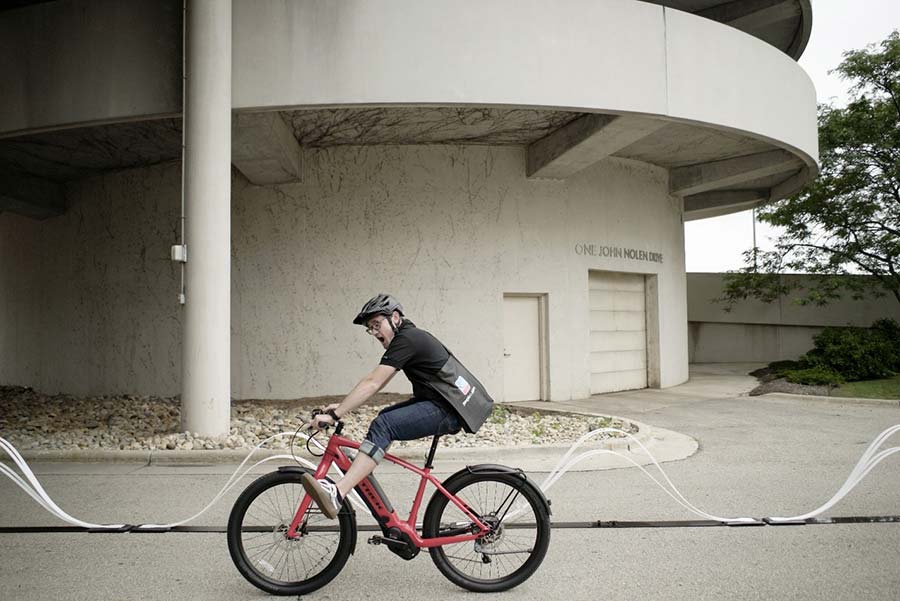 Common reaction to Riding the Wave.

You don’t have to take our word for it.

Check out these testimonials from test cities across the country.

The install and breakdown was less than 20 minutes and we had the public asking us all day when they were going to be seeing them around town. The materials were eye catching and gave a sense of separation without the time-consuming glue or drilling of typical temporary pilot materials. 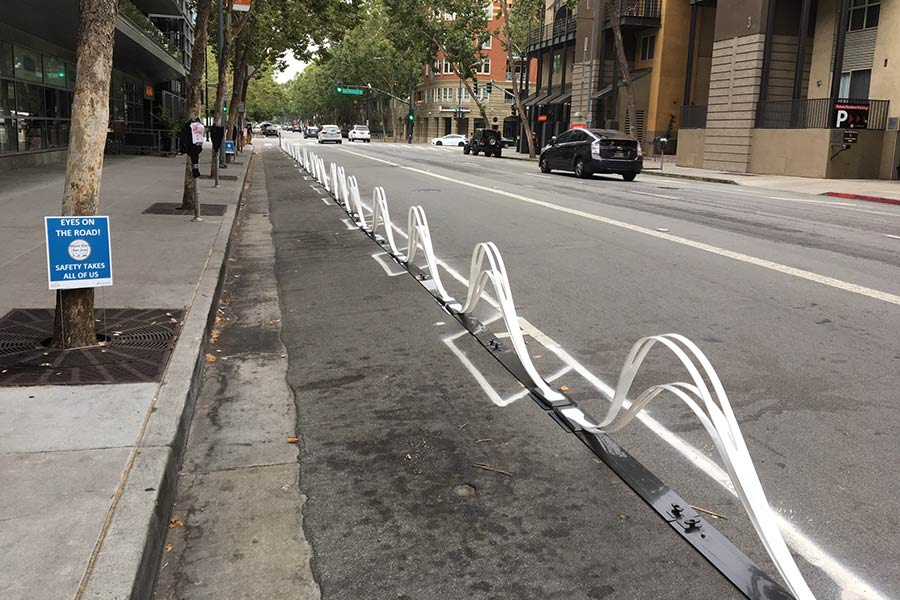 We used the Wave Delineator for a "pop-up" protected bike lane for one week in San José, California. Our bike lane featured five different devices to separate moving traffic from bicycles.

In a survey of users, the Wave Delineators were mentioned frequently as aesthetically pleasing and highly visible. The success of the demonstration bike lane led to the permanent installation of a network of protected bike lanes in our downtown. 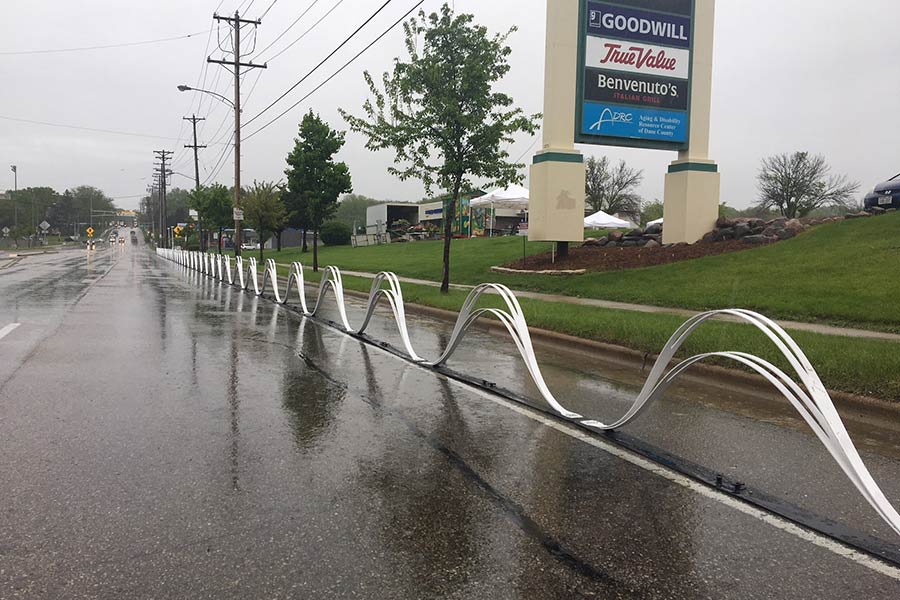 ...I've witnessed the Wave Delineator in action and even used it as the basis for research proposals in support of active transportation and enhancing access to bikeable public places, especially farmers markets.

The work of Bike Fixation Wave Delineator enables people safer access to marketplaces, which enhances the health benefits of local foods as it supplies communities with easily deployable solution to safer streets for bicyclists. 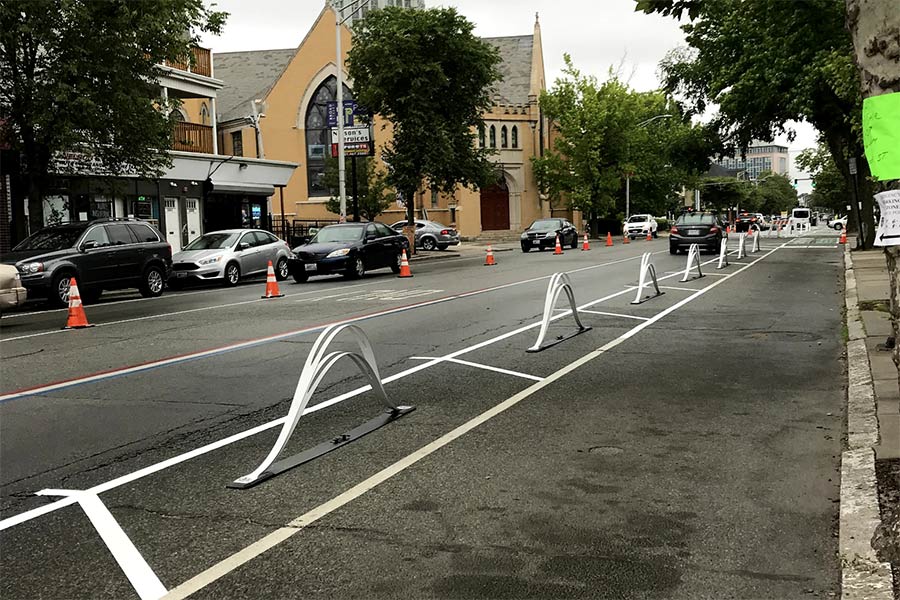 The wave delineators were a visually-appealing separation method for the pop-up separated bike lane and pedestrian bulb-out demonstration we conducted.

They definitely contributed a wow factor to the project, which was designed to draw in passersby to provide input on our proposed design. 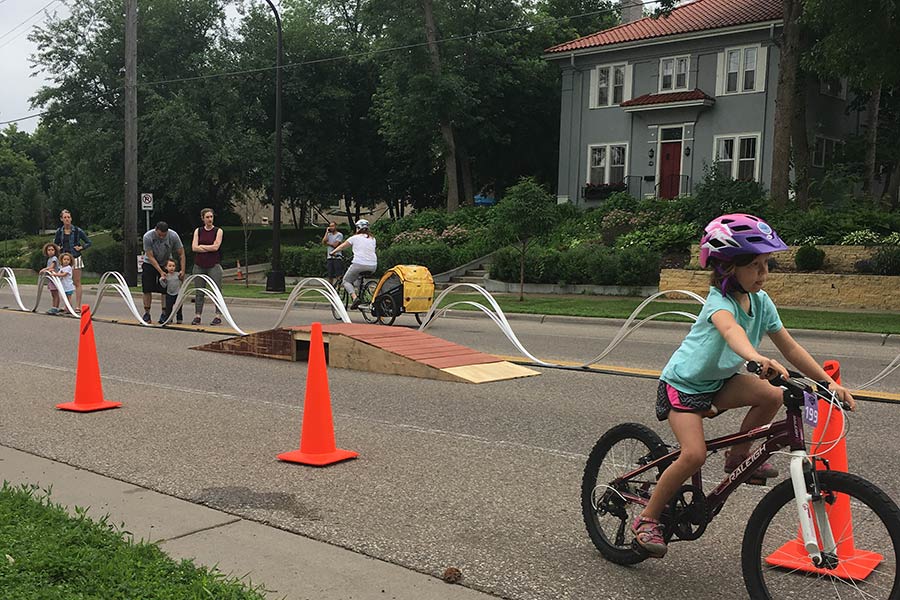 We have been using Wave Delineators at our pop-up bike park events all year. They are a great portable device for directing bicycle and pedestrian traffic. At our Open Streets events we have used them to separate general event traffic from our pop-up bike course - and they've worked like a charm. They are easy to transport and move and they are highly configurable. Many of our events require the course to be manipulated as the event goes one and the delineators allow us to make on the fly changes very quickly.

The Wave Delineators grab people’s attention. Every time we have used them people ask what they are and what they are used for. They want to touch and feel them. People can't keep their hands off them. And they just look cool.

We wouldn't have been able to host our pop-up bike park events at Minneapolis Open Streets without the use of the Wave Delineators. The Open Streets events draw thousands of bikers, walkers, and skaters, but in order for our pop-up bike park to be effective and safe we needed to keep event traffic separated from our course traffic. The Wave Delineators allowed us to do that effortlessly and without disrupting event traffic. 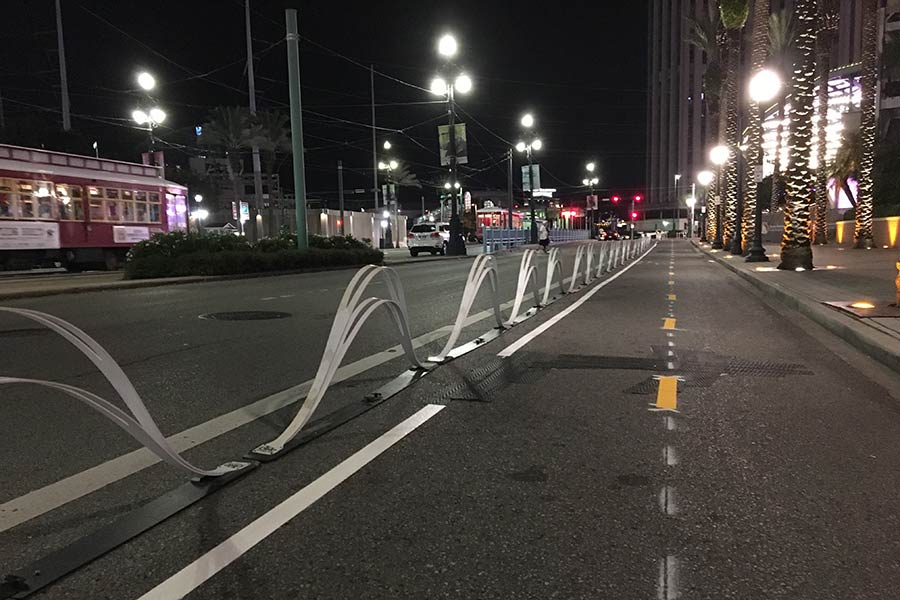 The Wave Delineators proved to be a valuable tool in our toolkit for demonstrating and evaluating temporary reconfiguration of streets to improve safety for biking.

Easy setup and removal is a huge benefit for both large and small scale projects.