One bicyclist’s reflection and takeaways from a Belgium cycle-cation. 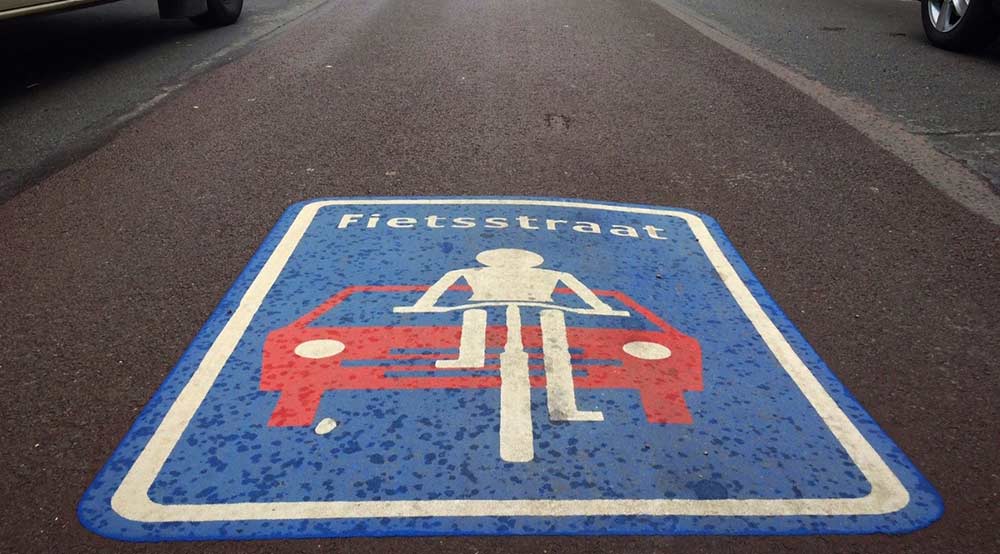 Belgium. Land of one million biers and an equal number of fietsen, Dutch for bicycles. I spent 12 days there recently, traveling across the pond to take in “Holy Week,” the moniker given to the back-to-back weekends of the vaunted spring classic races Ronde Van Vlanderen (Tour of Flanders) and the Paris-Roubaix. Professional cyclists are exalted like true heroes with regional fan clubs supporting their favorite rider(s). But the beauty of cycling in Belgium extends much deeper than just racing and competition. 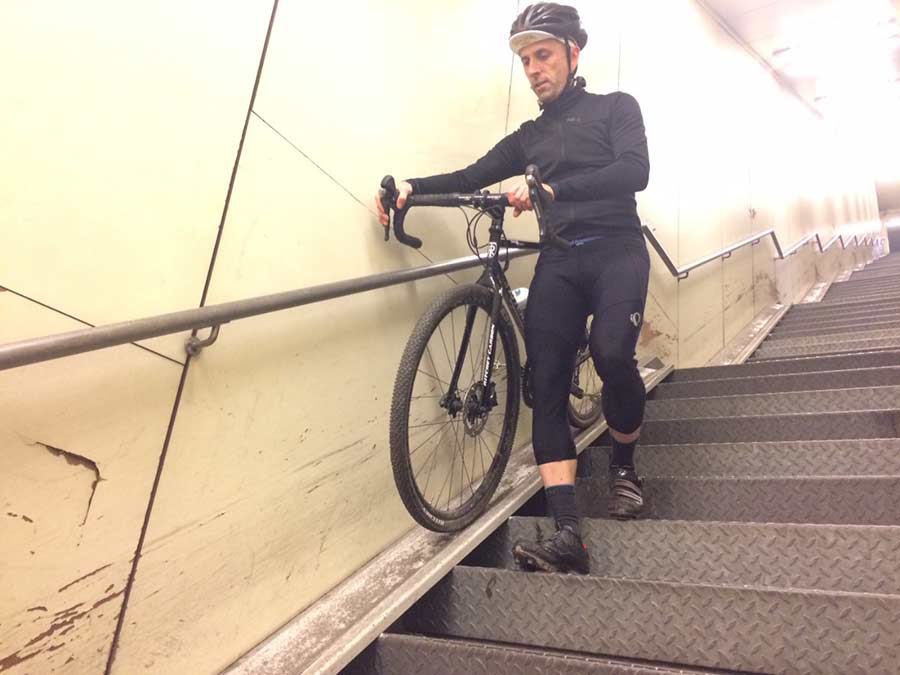 One of the many bicycle stair ramps in Belgium.

Belgian citizens cycle everywhere, and the semantic distinction is not lost on me. In the USA people tend to use the term “biker,” as in, “I bike to work.” In Belgium (and Europe in general) they say, “I cycle to work,” or to a friend’s house, or the bar, etc. It’s a small thing but it stands out. Cycling to Belgians is as natural as eating breakfast or tying your shoes.

In the sense that nearly everyone “cycles,” there is no overarching noticeable “infrastructure,” per se. Yet the accommodation made for cycling isn’t an afterthought, either. Stair ramps are common, and there are even two commuter tunnels with elevators on either end, under the Schelde River, bordering the western edge of Antwerp. 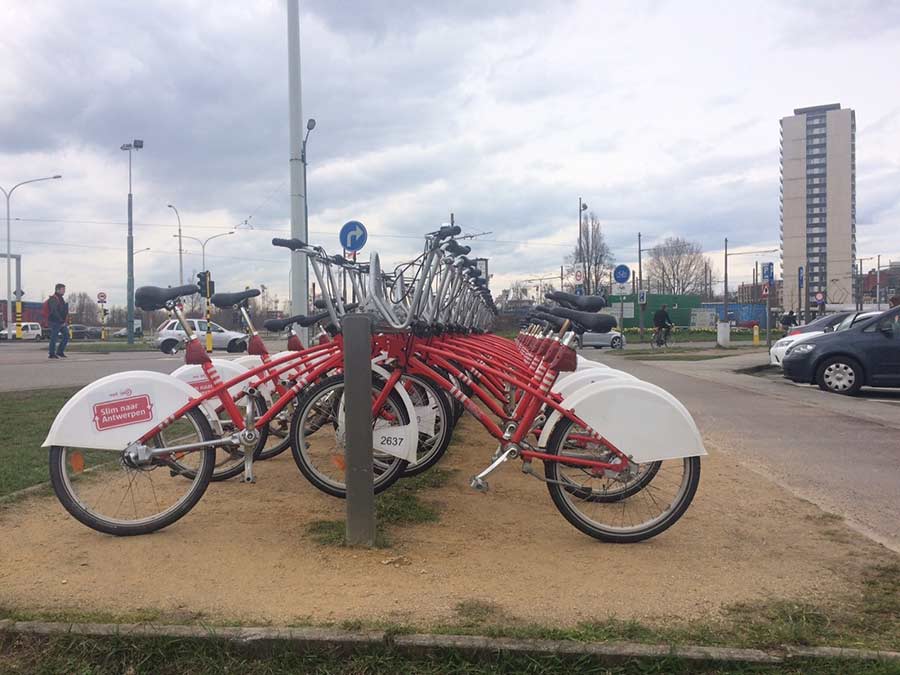 Velo Antwrpen bikes lined up at a bike share station.

The fietsen are everywhere. Business people cycling to work, children riding with parents, students pedaling to class. One bikeway I frequently rode had a ride counter which showed an average of 130k riders per month. Therefore, cycling reigns pretty much supreme, having the right of way often ahead of pedestrians, and certainly before motor vehicles, with clearly demarcated cycle lanes and independent traffic signals.

Bike Share is a common sight in Antwerp as over 150 Velo Antwerpen stations are located throughout the city, offering the red Velo bikes for covering short distances. Riders can purchase a pass good for the day, the week, or annually (4/10/49 euro respectively). Sheltered bike parking at transit stations is the norm, and in Kortrijk I saw the only public bike pump of the entire trip, a foot pump model. 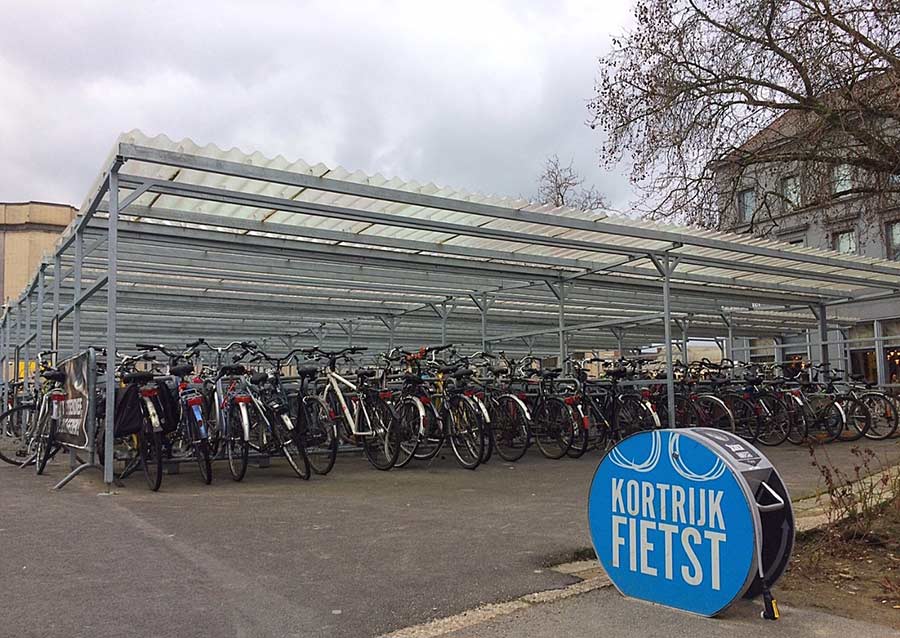 Bike parking filled to the brim.

I asked my host, W. Jeffrey Lockwood, if distracted driving is a big issue in Belgium. To be sure, I did observe drivers holding cell phones in their hands, talking or texting. The big difference, according to Lockwood, is that the chances are quite high that the same driver grew up riding a bicycle, and therefore fully expects to see cyclists using the roadways and cycle paths accordingly. As a result, there is less unexpected behavior on both sides.

The day before the Tour of Flanders I was riding the 240k We Ride Flanders Ronde Van Vlanderen Cyclo. As many as 16,000 riders participate in this event, and many times on the open roads cars would overtake us or pass in the oncoming direction. More often than not the cars wouldn’t even slow down drastically but overtook the group with a predictable path and a discernible lack of aggression. Cars are simply not the dominant road user that they are in the USA or in some other parts of the world, and it shows.

“Cars are simply not the dominant user that they are in the USA or other parts of the world, and it shows.”

The mutual respect toward all road users is evident and welcoming. I found myself with a real sense of envy and longing and belonging. Belgium is a true cycling utopia, and that’s without having set foot in the stated cycling nirvanas of Holland, Amsterdam, Copenhagen and the like, which are destinations on my short list of places I want to cycle next!