Bike Advocate of the Month: Bruce from Carmel, Indiana

This month we're highlighting someone who’s incredibly passionate about the power of the bike. 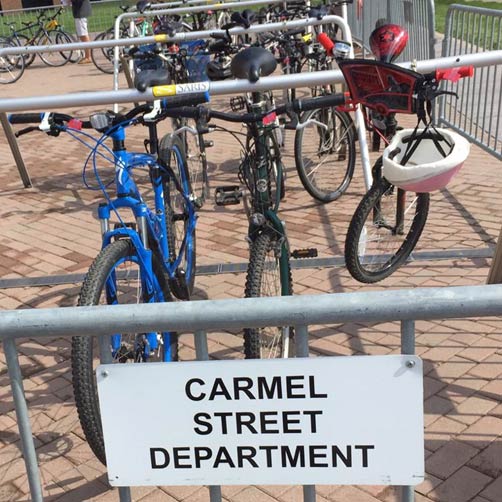 This month we're shifting our focus away from bike infrastructure installations to one of our incredibly passionate brand advocates. His name is Bruce Kimball, and he hails from Carmel, Indiana. 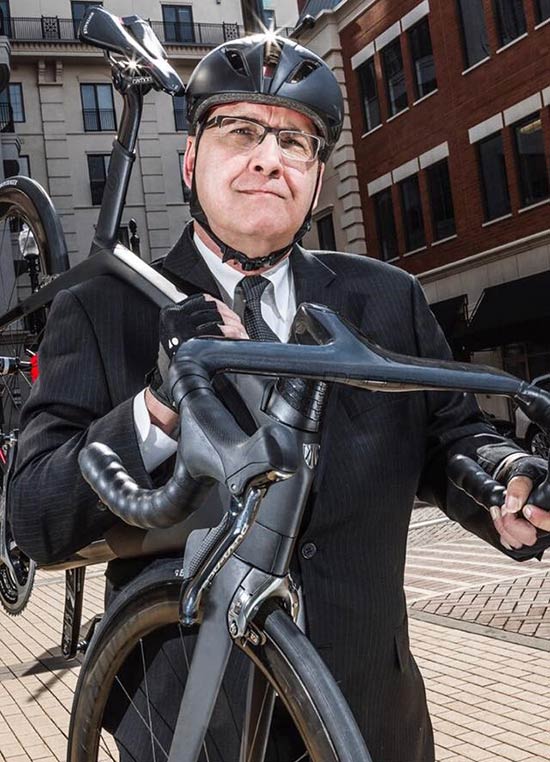 After years of volunteer work in the community, and being an empty nester, Bruce was encouraged to run for city council. Bruce walked door-to-door to over 3,000 houses speaking directly to residents about the positive impact of cycling. His efforts paid off. In January of 2016 Bruce was placed on the Carmel city council. Since his time on the council, he's ensured more bicycle parking at bike-friendly events, helped pass ordinances in favor of more bicycling parking, and is currently working on a $10-million-dollar pedestrian bridge to link with the neighboring community.

Bruce is a walking, talking example of what can get done when an enthusiastic individual gets involved at the local level. We caught up with Bruce to learn a little more about him, the city of Carmel, and what drives his commitment to the bike.

1) Can you tell us a little bit about Carmel, Indiana?

When I moved to Carmel in 1991 from Los Angeles, the city had zero bike paths or bicycle infrastructure. Shortly after I arrived our current Mayor was elected and soon every up-and-coming development was required to install multi-use paths, which have become Carmel's bicycle highways. The city also built a rails-to-trails extension to the Monon Trail that runs into downtown Indianapolis. It bisects our city and today is considered "beach-front property" with close to 1 billion dollars in new investment and more to come. Carmel now sports 175 miles of paths and trails, much of which is just now finally getting connected. 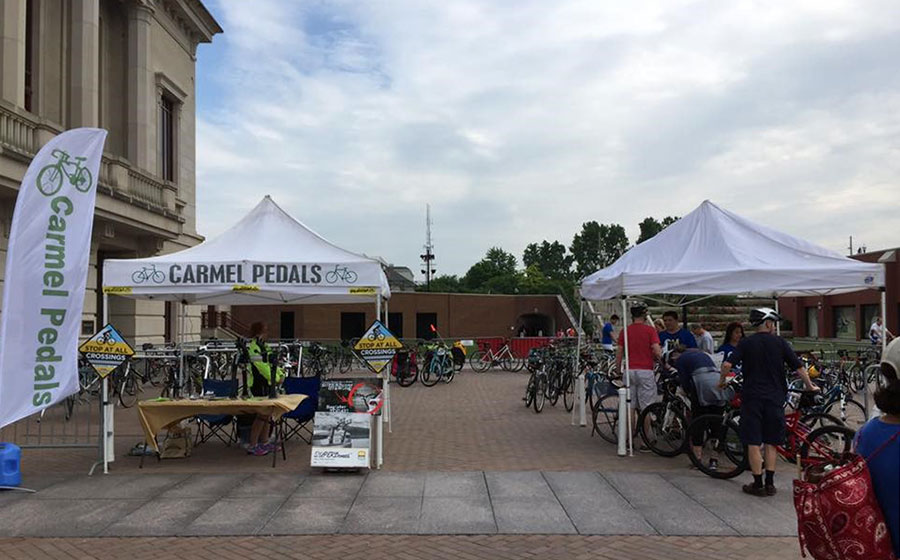 Cyclists coming together in Carmel, Indiana.

2) What sparked your interest in cycling?

My interest in cycling really grew about five years ago when "bicycle month" celebrations were minimal. Yes, we had some infrastructure – but not much when it came to organized events to help build a culture of bicycling. So I decided to start a weekly social ride that I hoped would encourage more riders to use our trail network.

As I became more involved in cycling, I realized what an important economic tool the bicycle could be. I saw our Saturday farmers' market bike corral grow from a couple dozen bikes to 200 or 600, depending on the time of year, and noticed that having secure parking was key. We were using basic street barricades, and now we use a combination of street barriers and Saris event racks to ensure there's enough bike parking. 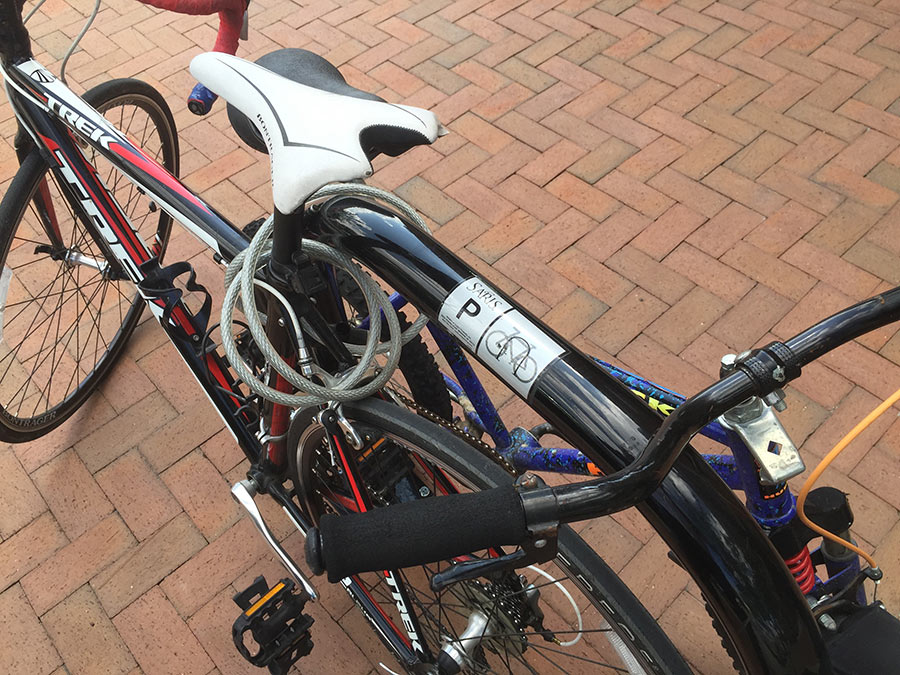 A Saris branded bike dock parking rack, as seen at a Carmel-based business.

3) Why did you want the Saris event racks for use in the city of Carmel?

Instead of tax abatements the city uses investment in quality of life to attract new business. That led me back to the question of "how can we grow everyday bicycling?" Carmel has a summer full of outdoor events with bikes scattered around, but no formal parking. Seeing the Saris Parking event racks online triggered my idea of how our city events needed, at minimum, temporary bike parking.

Once the event racks were up I realized another barrier: riding with camp chairs over your shoulder to an event. Thus my latest idea was born, "Ride a Bike, Borrow a Chair." This year's successful "soft launch" has us now ordering our second set of bag chairs. By next spring we hope to see demand growing to 100-200 chairs, depending on the outdoor event. We're even planning on having a couple dozen of children-sized chairs for next spring. 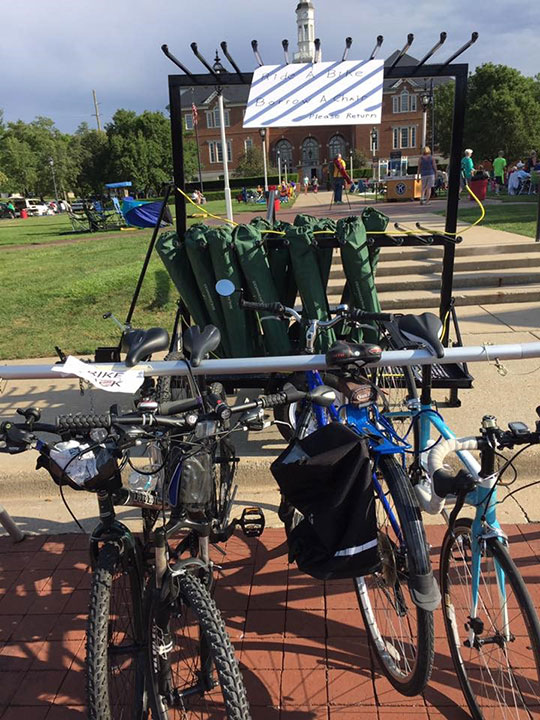 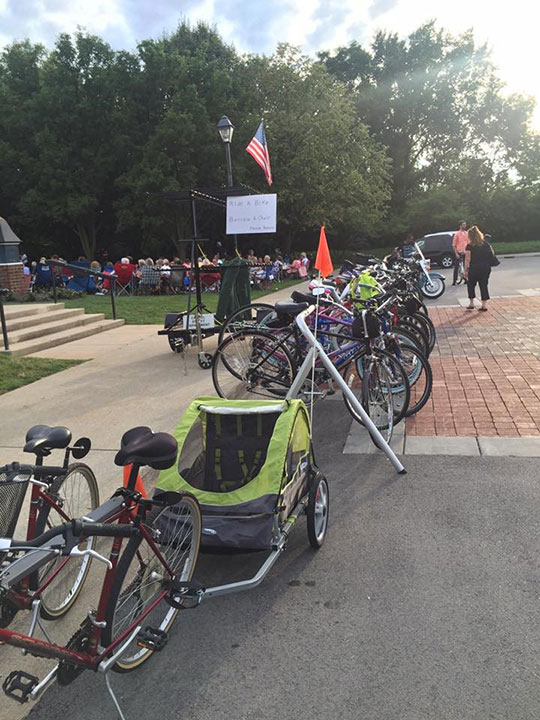 The first of September, Carmel is hosting the PGA BMW golf classic. To ease traffic we are encouraging guest to arrive by bicycle. The Saris Racks event parking racks will be there, and as we understand it this will mark the first formal bicycle parking for a PGA event.

We've also recently passed a bicycle parking ordinance requiring all new commercial and retail buildings to have short-term bike parking.In addition, anytime a developer installs long-term bicycle parking that's covered or indoor, the city will give the developer a 5% reduction on the auto-parking requirement. This is huge, as parking spots can cost $10- to $30-thousand-dollars or more per space. 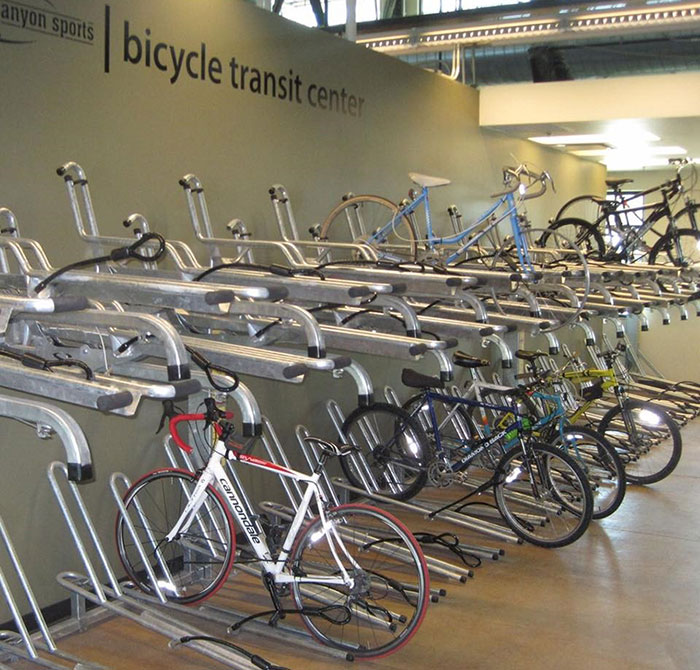 An example of the racks that will be used in Carmel's mini-hubs.

With the vision of creating a walkable and bicycle-friendly city, mixed-use projects, like these parking garages equipped with bike parking, will be the new standard. Saris bicycle parking racks have been specified for a number of the new mini-hubs, in addition to the bike docks on many of the city's sidewalks.

Since Carmel's cycling infrastructure has dramatically increased, our next challenge is to keep developing a culture that encourages businesses, churches and schools to all promote bicycling as active transportation. We've come a long way, yet there is much work left to be done.