In the final installment in our series of lessons learned from the great cycling cities of Europe, we find all is not roses (or tulips in the Netherlands) with respect to their bike infrastructure.

In the final installment in our series of lessons learned from the great cycling cities of Europe, we find all is not roses (or tulips in the Netherlands) with respect to their bike infrastructure.

There are blessings and curses for being a top bicycling city. Increased mode share of bike commuting can have both tangible and intangible benefits: less vehicle congestion, better public spaces, healthier citizenry, more productive employees and a cleaner environment. But the “dark-side” of having so many people commuting by bike is where to put all the bikes. In the great cycling cities across the globe, more and more frustration is being expressed at the lack of both quality and quantity of end of trip facilities for bikes.

In the latest Copenhagenize Index bike rankings, Copenhagen and Amsterdam both finish on the top steps of the podium at #1 and #2 respectively. High mode share for bikes as well as ingenious infrastructure designs and investment make these cities particularly great examples of a world-class bike city. However, in citizen surveys and polls, they give singularly dissatisfied opinions on their bike parking. How could these “Platinum” bike cities get below-average marks for their bike parking, and what lessons can we take for use in our US communities?

Firstly, there are some design differences between Europe and the US when it comes to both the bikes and the racks being used to park them. Copenhagen and Amsterdam have uniformity in bike style, with the appropriately named “Dutch-Style” or step-through city bike being the dominate style. 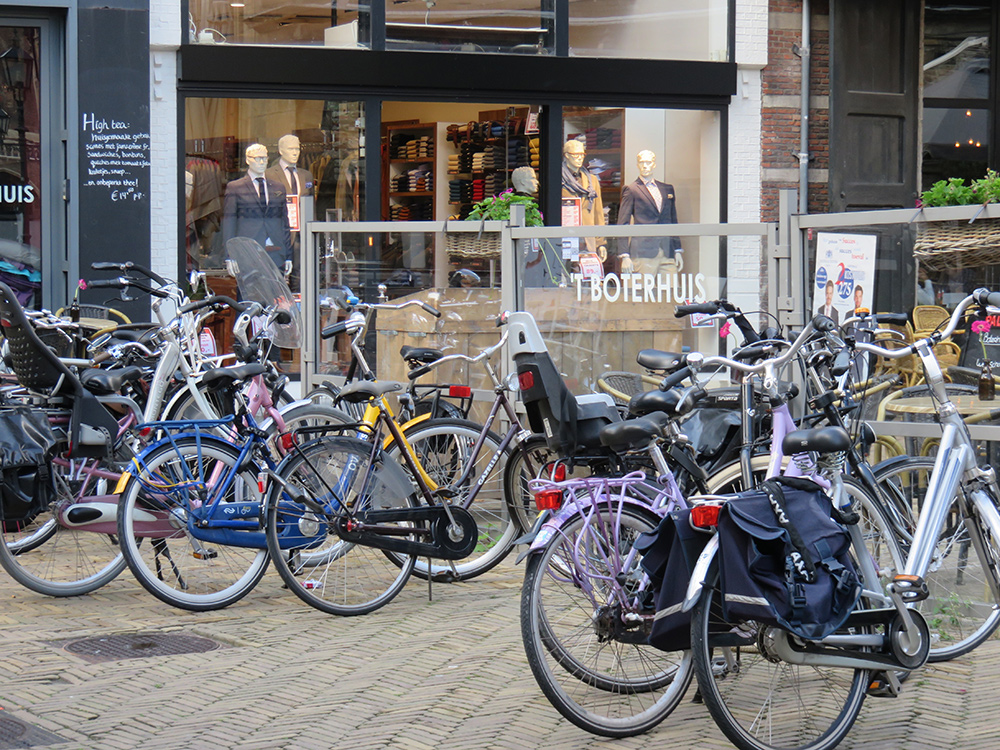 Add in the relatively flat terrain of both cities and you find that most bikes traveling the bike lanes of Amsterdam and Copenhagen are quite consistent: single-speed, narrow tires, upright handlebars, and generally non-descript (no flashy colors, graphics, or electronics). The only personal touch seems to be whether to choose wicker or wire for a front basket. With the bikes being so austere, thought of merely as an appliance, bike theft is simply viewed as an occupational hazard. So you rarely see a “U-Lock” or beefy chain lock. Here, the rear wheel lock, or “café-lock” is the standard. All of these characteristics add up to a bike parking standard that is very different from the US. Where the US applies the American Pedestrian and Bike Professionals (APBP) recommendations of fully supporting the bike in two places and ability to use a U-lock, the attitude of bike parking in Copenhagen and Amsterdam is either “park anywhere” or the front wheel sandwich. 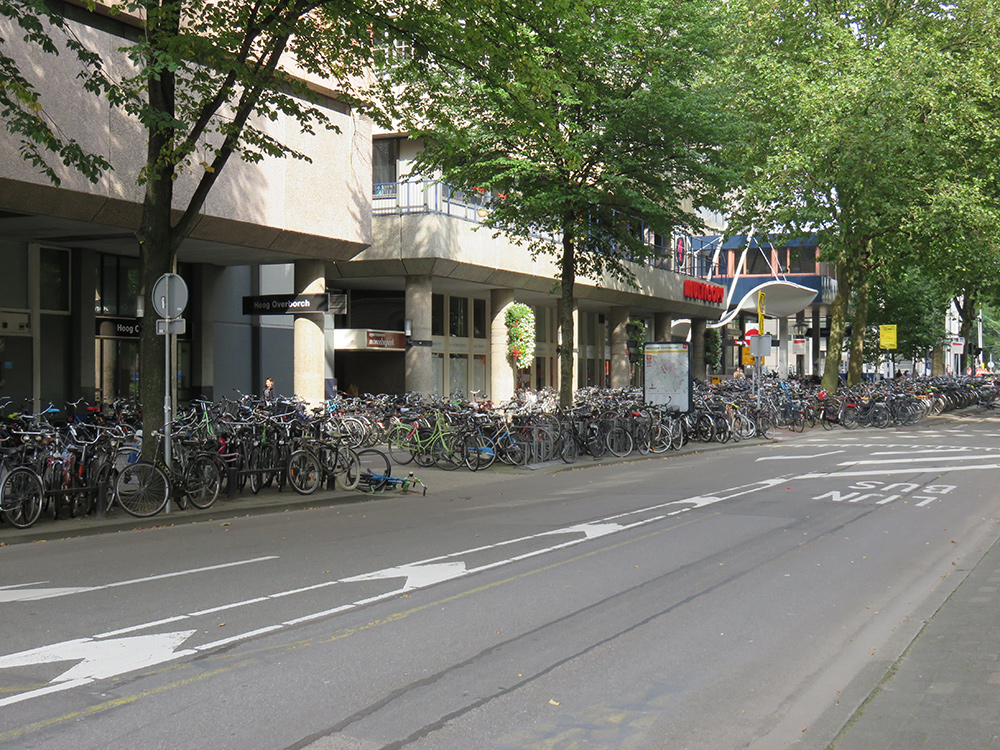 Bikes stacked up outside the train station in Utrecht, Netherlands.

But even though there are differences between the titans of biking in Europe and the US, we can learn from their successes and failures. There is a simple reason demand has far outpaced supply in these cities: poor planning. Amsterdam has close to 900,000 bikes, but only 400,000 parking spaces. Their Central Station currently employs floating barges to help with the demand, and they are on track to dig beneath their waterfront to add an additional 7000 spots. In Copenhagen, the central station only has parking for 1000 bikes when over 7000 is currently needed. The lesson to take from these quantity deficiencies is plan not for today, but for tomorrow. 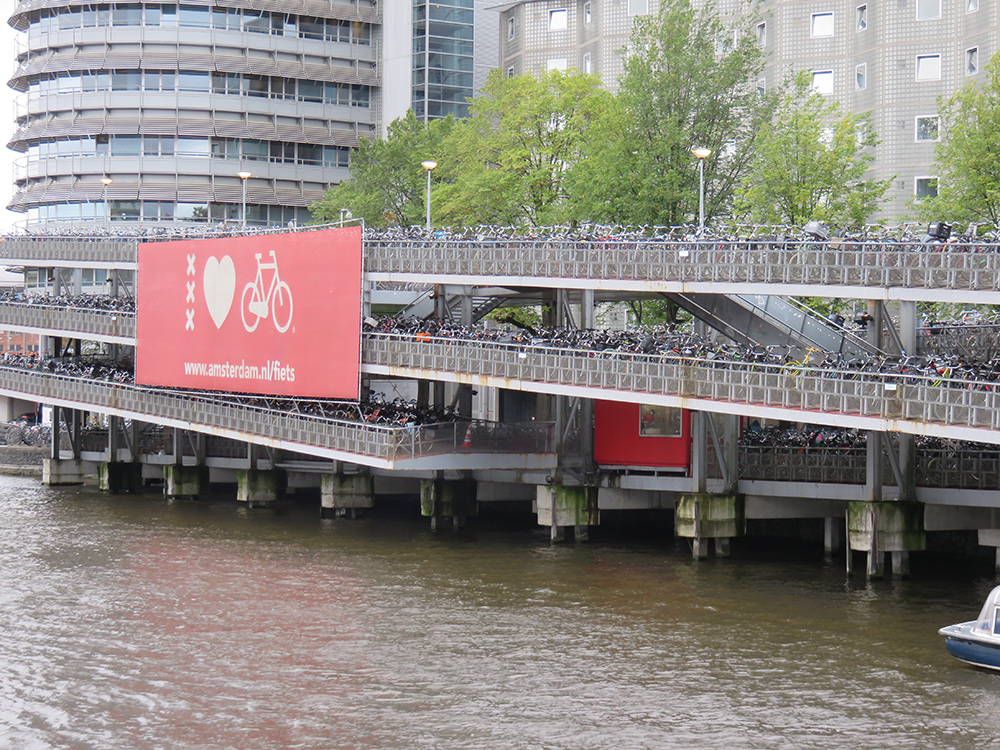 Bike commuting in the US is up 62% since 2000, and in selected cities that have invested in bike infrastructure like Washington DC, Pittsburgh, and Chicago commuting is up over 200%! This is not a temporary trend. Demographic shifts in transportation priorities points to continued long-term growth. The other important takeaway is investment in bike parking at transit stations. New stations in metropolitan Amsterdam and Copenhagen are investing millions of dollars in best-in-class parking and services. 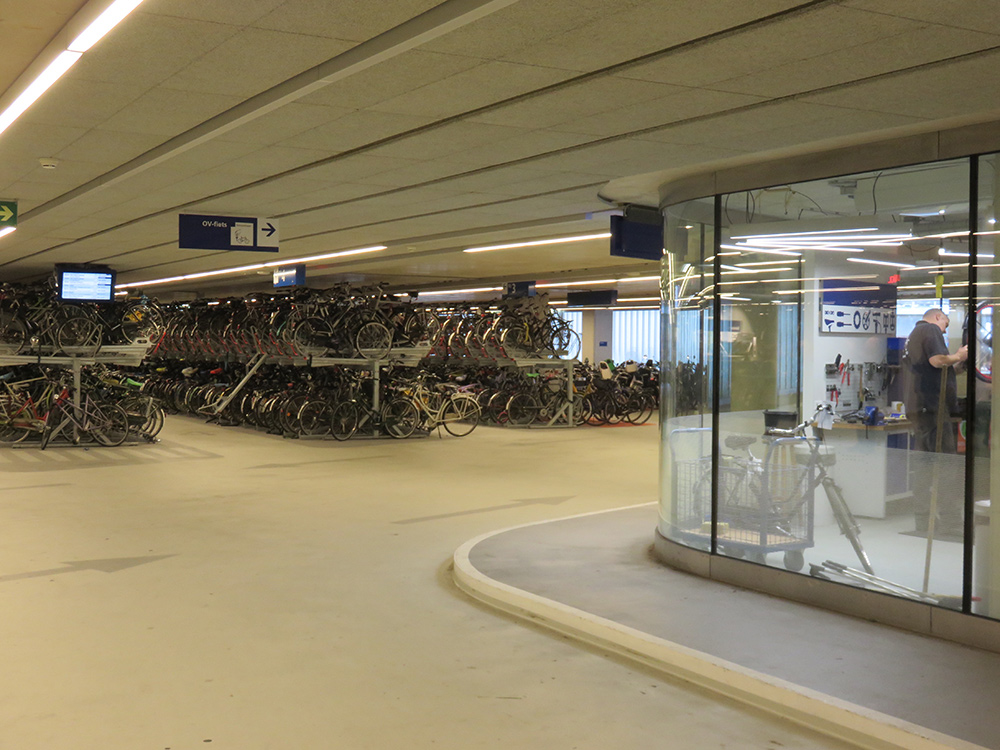 Repair stations, lift-assist racks, bike escalators and parking availability notifications are some examples of the prioritization of bikes, and their users, at these important transportation hubs. As US cities expand their own mass transit systems, the goal should be adequate bike facilities to meet a growing demand among current and future users. 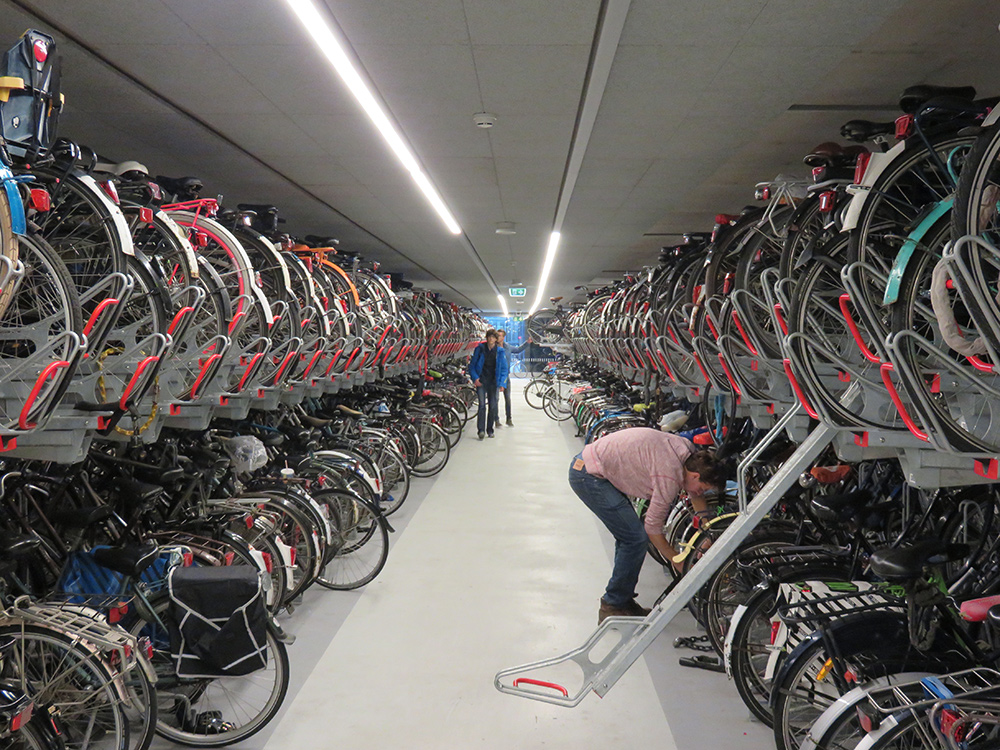 A+ bike parking in Malmo, Sweden.

Its not all rainbows and unicorns when it comes to bike infrastructure in the worlds leading bike cities. They have their fair share of problems, and bike parking is a glaring one. But because the US is just starting to build out our infrastructure, we have a great opportunity to invest wisely and plan for the future. 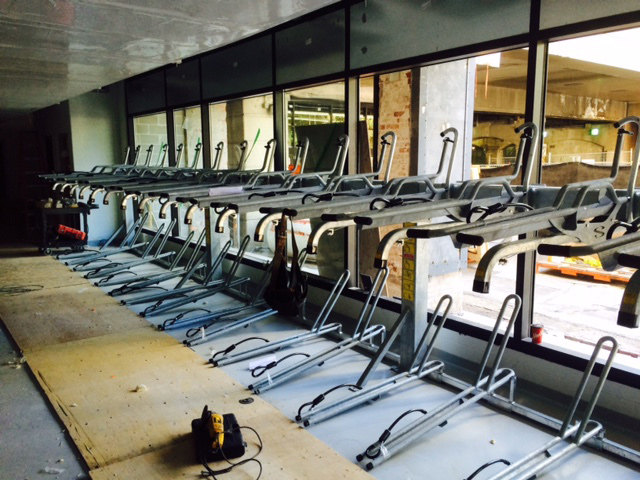